Lupus nephritis is a leading cause of mortality among systemic lupus erythematosus (SLE) patients, and its heterogeneous nature poses a significant challenge to the development of effective diagnostics and treatments. Single cell RNA sequencing (scRNA-seq) offers a potential solution to dissect the heterogeneity of the disease and enables the study of similar cell types distant from the site of renal injury to identify novel biomarkers. We applied scRNA-seq to human renal and skin biopsy tissues and demonstrated that scRNA-seq can be performed on samples obtained during routine care. Chronicity index, IgG deposition, and quantity of proteinuria correlated with a transcriptomic-based score composed of IFN-inducible genes in renal tubular cells. Furthermore, analysis of cumulative expression profiles of single cell keratinocytes dissociated from nonlesional, non–sun-exposed skin of patients with lupus nephritis also revealed upregulation of IFN-inducible genes compared with keratinocytes isolated from healthy controls. This indicates the possible use of scRNA-seq analysis of skin biopsies as a biomarker of renal disease. These data support the potential utility of scRNA-seq to provide new insights into the pathogenesis of lupus nephritis and pave the way for exploiting a readily accessible tissue to reflect injury in the kidney. 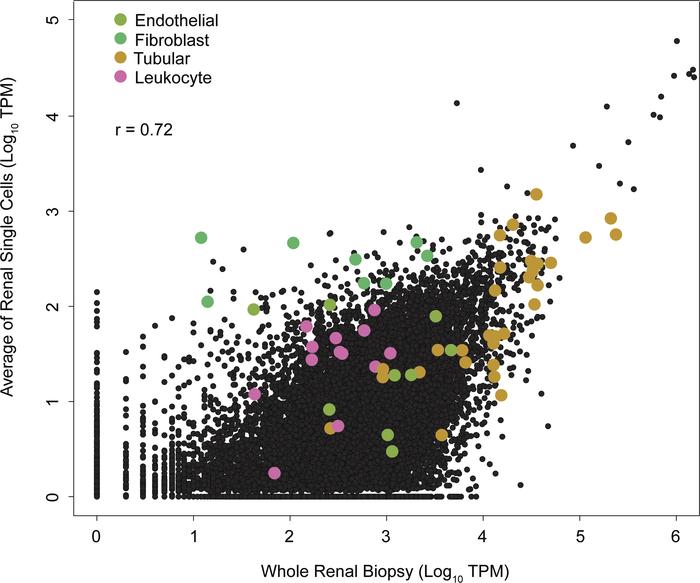