Idiopathic pulmonary fibrosis (IPF) is a life-threatening disease without effective treatment, highlighting the need for identifying new targets and treatment modalities. The pathogenesis of IPF is complex, and engaging multiple targets simultaneously might improve therapeutic efficacy. To assess the role of the endocannabinoid/cannabinoid receptor 1 (endocannabinoid/CB1R) system in IPF and its interaction with inducible nitric oxide synthase (iNOS) as dual therapeutic targets, we analyzed lung fibrosis and the status of the endocannabinoid/CB1R system and iNOS in mice with bleomycin-induced pulmonary fibrosis (PF) and in lung tissue and bronchoalveolar lavage fluid (BALF) from patients with IPF, as well as controls. In addition, we investigated the antifibrotic efficacy in the mouse PF model of an orally bioavailable and peripherally restricted CB1R/iNOS hybrid inhibitor. We report that increased activity of the endocannabinoid/CB1R system parallels disease progression in the lungs of patients with idiopathic PF and in mice with bleomycin-induced PF and is associated with increased tissue levels of interferon regulatory factor-5. Furthermore, we demonstrate that simultaneous engagement of the secondary target iNOS by the hybrid CB1R/iNOS inhibitor has greater antifibrotic efficacy than inhibition of CB1R alone. This hybrid antagonist also arrests the progression of established fibrosis in mice, thus making it a viable candidate for future translational studies in IPF.

Effects of rimonabant, MRI-1867, or AM6545 treatment on survival and lung fibrosis development in bleomycin-treated mice. 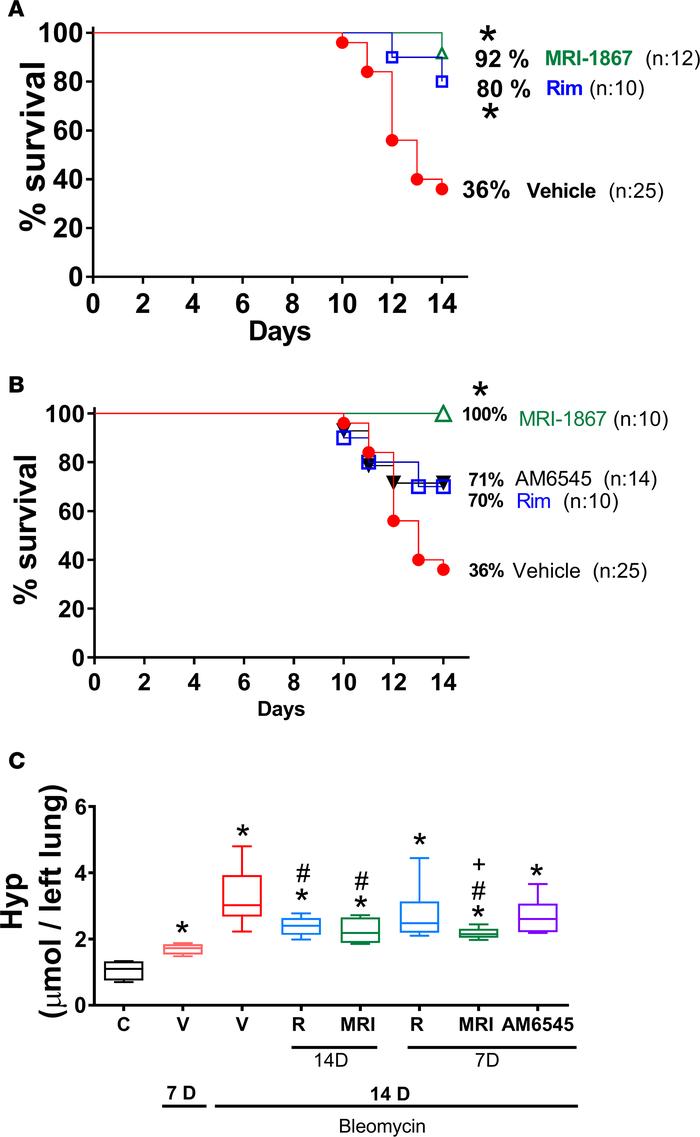