Allogeneic hematopoietic cell transplantation (allo-HCT) is an effective immunotherapy for a variety of hematologic malignances, yet its efficacy is impeded by the development of graft-versus-host disease (GVHD). GVHD is characterized by activation, expansion, cytokine production, and migration of alloreactive donor T cells. Hence, strategies to limit GVHD are highly desirable. Ceramides are known to contribute to inflammation and autoimmunity. However, their involvement in T-cell responses to alloantigens is undefined. In the current study, we specifically characterized the role of ceramide synthase 6 (CerS6) after allo-HCT using genetic and pharmacologic approaches. We found that CerS6 was required for optimal T cell activation, proliferation, and cytokine production in response to alloantigen and for subsequent induction of GVHD. However, CerS6 was partially dispensable for the T cell–mediated antileukemia effect. At the molecular level, CerS6 was required for efficient TCR signal transduction, including tyrosine phosphorylation, ZAP-70 activation, and PKCθ/TCR colocalization. Impaired generation of C16-ceramide was responsible for diminished allogeneic T cell responses. Furthermore, targeting CerS6 using a specific inhibitor significantly reduced T cell activation in mouse and human T cells in vitro. Our study provides a rationale for targeting CerS6 to control GVHD, which would enhance the efficacy of allo-HCT as an immunotherapy for hematologic malignancies in the clinic. 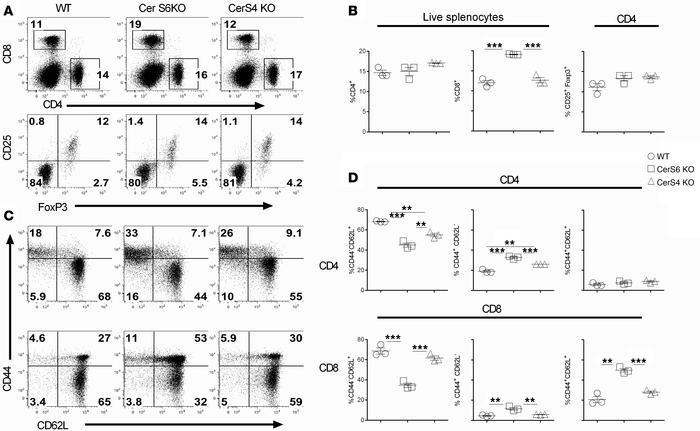 Spleens were obtained from unmanipulated age- and sex-matched WT, ceramide synthase 4 (CerS4) KO, or ceramide synthase 6 (CerS6) KO mice on a B6 background. Splenocytes were individually processed, counted, and stained for the expression of CD4, CD8, Foxp3, CD44, and CD62L. ( and ) Percentages of CD4+ or CD8+ cells on total live splenocytes, percentages of CD25+Foxp3+ cells on gated CD4+ cells, and ( and ) CD44 and CD62L expression on gated CD4+ or CD8+ cells are shown. ( and ) Data shown are from 1 representative mouse. The data are from 1 representative experiment of 3 independent experiments (mean ± SD with 3 mice per group). Significance was determined by using ANOVA test. ** < 0.01, *** < 0.001.