Glaucoma is the second leading cause of blindness worldwide. Physicians often use surrogate endpoints to monitor the progression of glaucomatous neurodegeneration. These approaches are limited in their ability to quantify disease severity and progression due to inherent subjectivity, unreliability, and limitations of normative databases. Therefore, there is a critical need to identify specific molecular markers that predict or measure glaucomatous neurodegeneration. Here, we demonstrate that growth differentiation factor 15 (GDF15) is associated with retinal ganglion cell death. expression in the retina is specifically increased after acute injury to retinal ganglion cell axons and in a murine chronic glaucoma model. We also demonstrate that the ganglion cell layer may be one of the sources of secreted GDF15 and that GDF15 diffuses to and can be detected in aqueous humor (AH). In validating these findings in human patients with glaucoma, we find not only that GDF15 is increased in AH of patients with primary open angle glaucoma (POAG), but also that elevated GDF15 levels are significantly associated with worse functional outcomes in glaucoma patients, as measured by visual field testing. Thus, GDF15 maybe a reliable metric of glaucomatous neurodegeneration, although further prospective validation studies will be necessary to determine if GDF15 can be used in clinical practice. 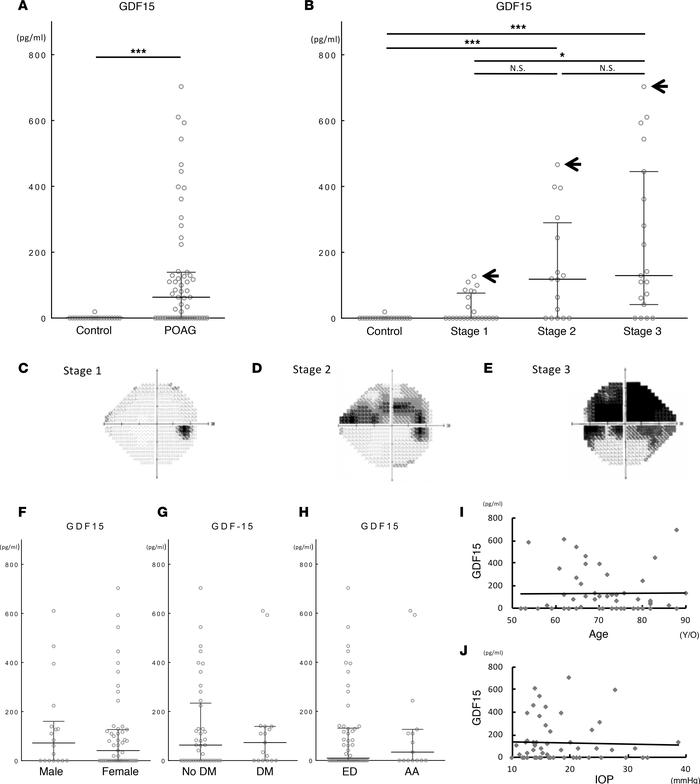