Three-dimensional cardiac mapping is important for optimal visualization of the heart during cardiac ablation for the treatment of certain arrhythmias. However, many hospitals and clinics worldwide cannot afford the high cost of the current mapping systems. We set out to determine if, using predefined algorithms, comparable 3D cardiac maps could be created by a new device that relies on data generated from single-plane fluoroscopy and patient recording and monitoring systems, without the need for costly equipment, infrastructure changes, or specialized catheters. The study included phantom and animal experiments to compare the prototype test device, Navik 3D, with the existing CARTO 3 System. The primary endpoint directly compared: (a) the 3D distance between the Navik 3D–simulated ablation location and the back-projected ground truth location of the pacing and mapping catheter electrode, and (b) the same distance for CARTO. The study’s primary objective was considered met if the 95% confidence lower limit was greater than 0.75% for the Navik 3D–CARTO difference between the 2 distances, or less than or equal to 2 mm. Study results showed that the Navik 3D performance was equivalent to the CARTO system, and that accurate 3D cardiac maps can be created using data from equipment that already exists in all electrophysiology labs.

Navik 3D in the context of the electrophysiology lab. 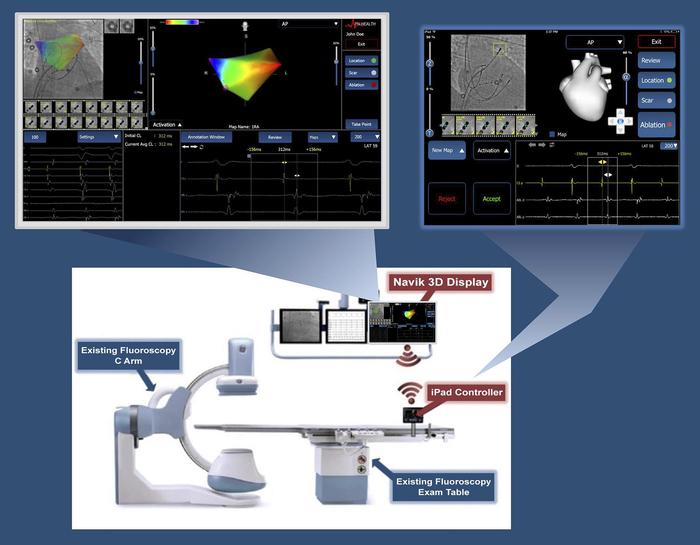 Navik 3D utilizes data from existing fluoroscopy and electrocardiogram-electrogram equipment to generate 3D cardiac maps for use during electrophysiology procedures. The system provides 2 user interfaces (U/I) to the interventional team: (i) Main application U/I (upper left) generated by the system’s Main computer workstation, which displays real-time fluoroscopy images and the 3D cardiac map, and (ii) a U/I on the Apple iPad (upper right), which serves as controller only and enables physician-directed operation from any location in the electrophysiology lab. AP, anteroposterior; CL, cycle length; LAT, local activation time.