In cystic fibrosis (CF), airway mucus becomes thick and viscous, and its clearance from the airways is impaired. The gel-forming mucins undergo an ordered “unpacking/maturation” process after granular release that requires an optimum postsecretory environment, including hydration and pH. We hypothesized that this unpacking process is compromised in the CF lung due to abnormal transepithelial fluid transport that reduces airway surface hydration and alters ionic composition. Using human tracheobronchial epithelial cells derived from non-CF and CF donors and mucus samples from human subjects and domestic pigs, we investigated the process of postsecretory mucin unfolding/maturation, how these processes are defective in CF airways, and the probable mechanism underlying defective unfolding. First, we found that mucins released into a normal lung environment transform from a compact granular form to a linear form. Second, we demonstrated that this maturation process is defective in the CF airway environment. Finally, we demonstrated that independent of HCO3− and pH levels, airway surface dehydration was the major determinant of this abnormal unfolding process. This defective unfolding/maturation process after granular release suggests that the CF extracellular environment is ion/water depleted and likely contributes to abnormal mucus properties in CF airways prior to infection and inflammation.

Correlation between the rate of liquid volume secretion and mucin maturation. 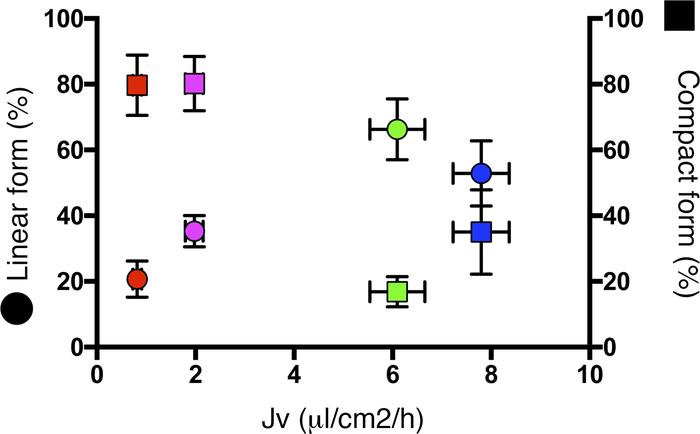