METHODS. Forty-three idiopathic DCM patients (mean left ventricular ejection fraction 0.24 ± 0.09) were treated with β-blockers. Serial ventriculography and endomyocardial biopsies were performed at baseline, and after 3 and 12 months of treatment. Changes in RT-PCR (candidate miRs) or array-measured miRs were compared based on the presence (R) or absence (NR) of a reverse-remodeling response, and a miR-mRNA-function pathway analysis (PA) was performed.

Box-and-whisker plots of RT-PCR RNA abundance data for a subset of candidate miRs as described in the text. 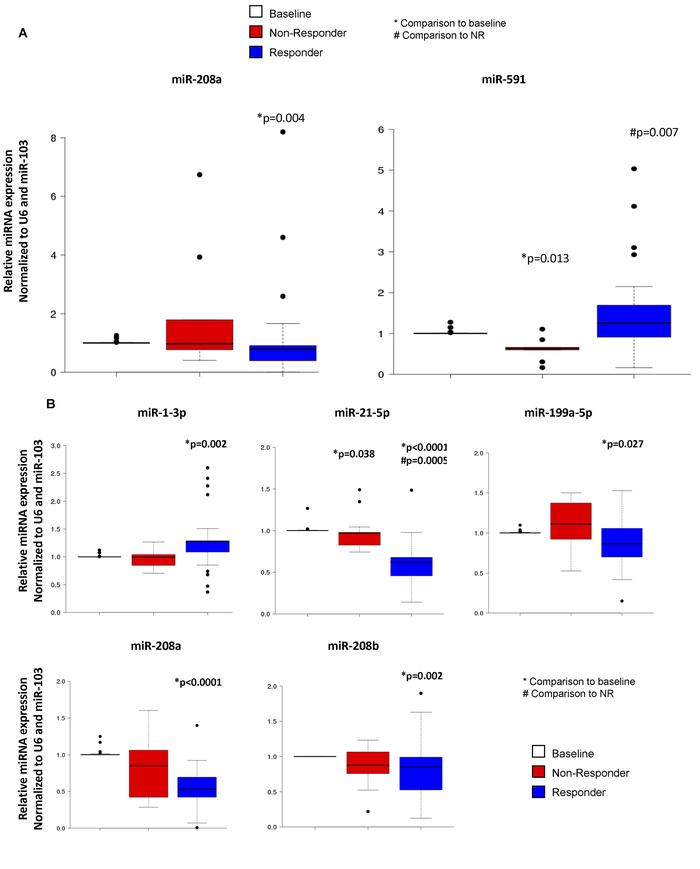 Boxes delineate 1st (lower border) and 3rd (upper border) quartiles from the median; the length of the whiskers is 1.5 times the interquartile distance (IQD), with values beyond the IQD plotted as outliers. miR expression was normalized to the combination of the small RNA U6 and miR-103, and is represented as fold difference from baseline. Comparisons were made to Non-Responder (NR) and Responder (R) as described in the Figure. () 3 months. () 12 months. Nonparametric Wilcoxon signed-rank test was performed plus Hochberg-corrected significance levels, as described in Methods. values at 3 months: baseline = 41; NR = 9; R = 32. values at 12 months: baseline= 35; NR = 11; R = 24.