Anti-SIRPα antibodies as a potential new tool for cancer immunotherapy

Anti-SIRPα antibodies as a potential new tool for cancer immunotherapy

Tumor cells are thought to evade immune surveillance through interaction with immune cells. Much recent attention has focused on the modification of immune responses as a basis for new cancer treatments. SIRPα is an Ig superfamily protein that inhibits phagocytosis in macrophages upon interaction with its ligand CD47 expressed on the surface of target cells. Here, we show that SIRPα is highly expressed in human renal cell carcinoma and melanoma. Furthermore, an anti-SIRPα Ab that blocks the interaction with CD47 markedly suppressed tumor formation by renal cell carcinoma or melanoma cells in immunocompetent syngeneic mice. This inhibitory effect of the Ab appeared to be mediated by dual mechanisms: direct induction of Ab-dependent cellular phagocytosis of tumor cells by macrophages and blockade of CD47-SIRPα signaling that negatively regulates such phagocytosis. The antitumor effect of the Ab was greatly attenuated by selective depletion not only of macrophages but also of NK cells or CD8+ T cells. In addition, the anti-SIRPα Ab also enhances the inhibitory effects of Abs against CD20 and programmed cell death 1 (PD-1) on tumor formation in mice injected with SIRPα-nonexpressing tumor cells. Anti-SIRPα Abs thus warrant further study as a potential new therapy for a broad range of cancers. 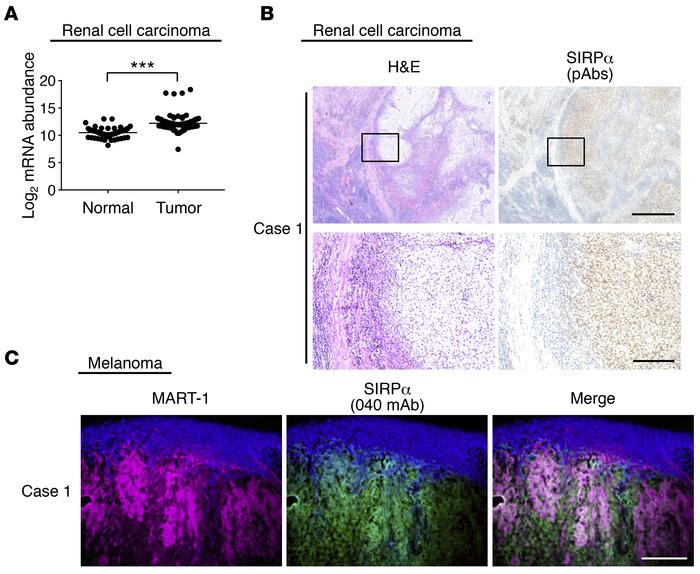