Systemic lupus erythematosus (SLE) is a complex systemic autoimmune disease driven by both innate and adaptive immune cells. African Americans tend to present with more severe disease at an earlier age compared with patients of European ancestry. In order to better understand the immunological differences between African American and European American patients, we analyzed the frequencies of B cell subsets and the expression of B cell activation markers from a total of 68 SLE patients and 69 normal healthy volunteers. We found that B cells expressing the activation markers CD86, CD80, PD1, and CD40L, as well as CD19+CD27–IgD– double-negative B cells, were enriched in African American patients vs. patients of European ancestry. In addition to increased expression of CD40L, surface levels of CD40 on B cells were lower, suggesting the engagement of the CD40 pathway. In vitro experiments confirmed that CD40L expressed by B cells could lead to CD40 activation and internalization on adjacent B cells. To conclude, these results indicate that, compared with European American patients, African American SLE patients present with a particularly active B cell component, possibly via the activation of the CD40/CD40L pathway. These data may help guide the development of novel therapies. 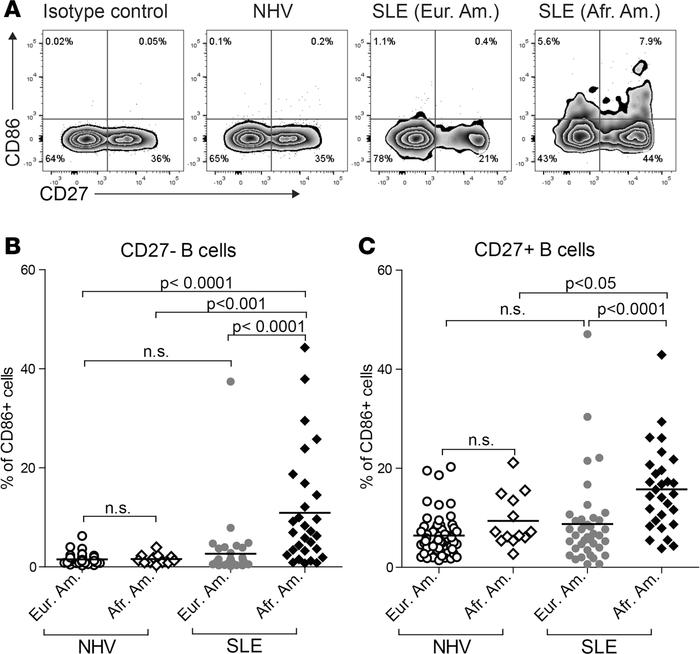 () Representative zebra plot of CD86 and CD27 expression on CD19+ total B cells from peripheral blood mononuclear cells of a normal healthy volunteer (NHV) and SLE European American (Eur. Am.) and Afr. Am. patients. Numbers on zebra plots represent percentages of cells in each quadrant. ( and ) Summarized frequencies of CD86+CD27– B cells () or CD86+CD27+ memory B cells () in 56 Eur. Am. and 13 Afr. Am. NHV donors and 39 Eur. Am. and 29 Afr. Am. SLE patients. The horizontal bars represent the average for each group. values are indicated (Mann-Whitney test).