Diabetes is associated with altered cellular metabolism, but how altered metabolism contributes to the development of diabetic complications is unknown. We used the BKS diabetic mouse model to investigate changes in carbohydrate and lipid metabolism in kidney cortex, peripheral nerve, and retina. A systems approach using transcriptomics, metabolomics, and metabolic flux analysis identified tissue-specific differences, with increased glucose and fatty acid metabolism in the kidney, a moderate increase in the retina, and a decrease in the nerve. In the kidney, increased metabolism was associated with enhanced protein acetylation and mitochondrial dysfunction. To confirm these findings in human disease, we analyzed diabetic kidney transcriptomic data and urinary metabolites from a cohort of Southwestern American Indians. The urinary findings were replicated in 2 independent patient cohorts, the Finnish Diabetic Nephropathy and the Family Investigation of Nephropathy and Diabetes studies. Increased concentrations of TCA cycle metabolites in urine, but not in plasma, predicted progression of diabetic kidney disease, and there was an enrichment of pathways involved in glycolysis and fatty acid and amino acid metabolism. Our findings highlight tissue-specific changes in metabolism in complication-prone tissues in diabetes and suggest that urinary TCA cycle intermediates are potential prognostic biomarkers of diabetic kidney disease progression.

Transcriptomic and metabolomic analyses from control and diabetic mice. 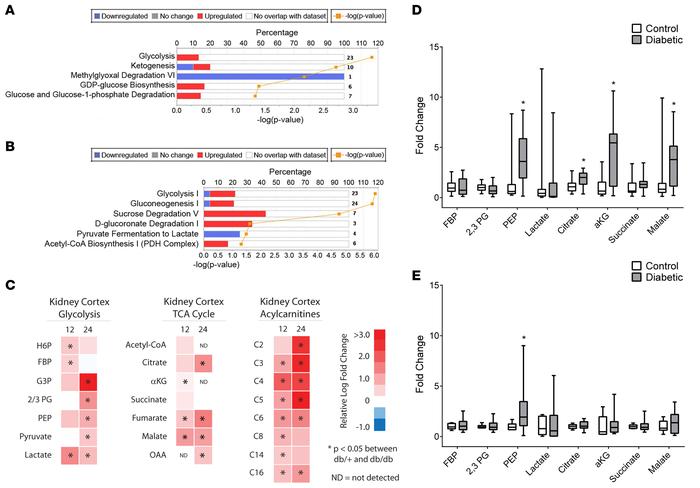 ( and ) Predicted alteration of pathways involved in glucose metabolism in the () kidney cortex and () sciatic nerve in 24-week-old diabetic versus control mice, with the percentage of genes upregulated (red) and downregulated (blue) ( < 0.05 [–log( value) > 1.3], kidney = 5/group; nerve control = 9, nerve diabetic = 10). The number of transcripts in each pathway is shown at the right margin corresponding to each pathway. () Relative levels of glycolytic, TCA cycle, and acylcarnitine metabolites from kidney cortex of 12- and 24-week-old diabetic versus control mice are depicted as upregulated (red) or downregulated (blue) in diabetic mice ( = 12/group; ND, not detected above noise). ( and ) Levels of glycolytic and TCA cycle metabolites in urine from () 12- and () 24-week-old control and diabetic mice ( = 5/group). * < 0.05, Student’s 2-tailed test.