Posttransplantation cyclophosphamide (PTCy) effectively prevents graft-versus-host disease (GVHD), but its immunologic impact is poorly understood. We assessed lymphocyte reconstitution via flow cytometry ( = 74) and antigen receptor sequencing ( = 35) in recipients of myeloablative, HLA-matched allogeneic BM transplantation using PTCy. Recovering T cells were primarily phenotypically effector memory with lower T cell receptor β () repertoire diversity than input donor repertoires. Recovering B cells were predominantly naive with immunoglobulin heavy chain locus () repertoire diversity similar to donors. Numerical T cell reconstitution and diversity were strongly associated with recipient cytomegalovirus seropositivity. Global similarity between input donor and recipient posttransplant repertoires was uniformly low at 1–2 months after transplant but increased over the balance of the first posttransplant year. Blood repertoires at ≥3 months after transplant were often dominated by clones present in the donor blood/marrow memory CD8+ compartment. Limited overlap was observed between the repertoires of T cells infiltrating the skin or gastrointestinal tract versus the blood. Although public sequences associated with herpesvirus- or alloantigen-specific CD8+ T cells were detected in some patients, posttransplant and repertoires were unique to each individual. These data define the immune dynamics occurring after PTCy and establish a benchmark against which immune recovery after other transplantation approaches can be compared. 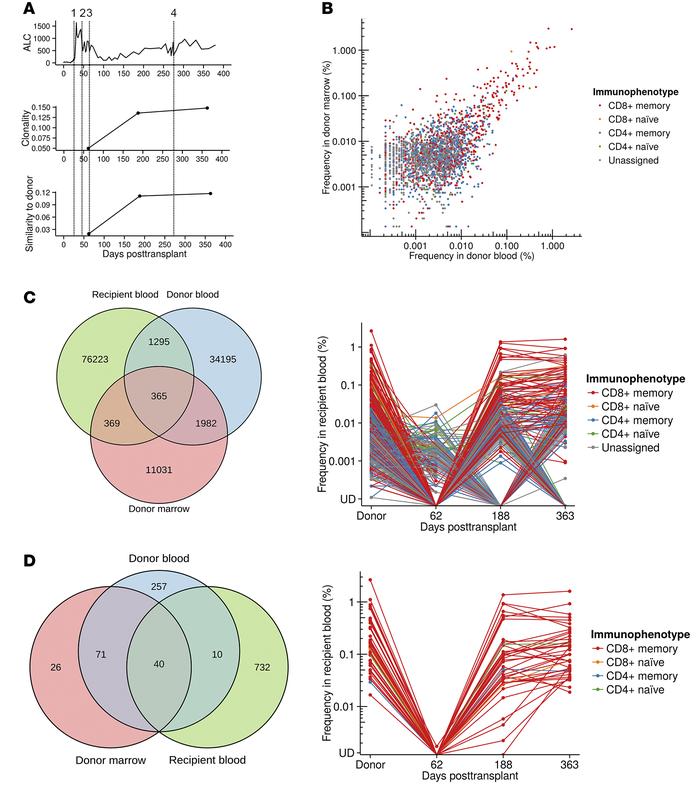 Data from donor and recipient 001-006, both of whom were CMV seronegative, are shown. T cells were sorted from donor peripheral blood (PB) and BM samples by FACS and assessed by sequencing. Unfractionated peripheral blood mononuclear cells collected from the recipient on posttransplant days +62, +188, and +363 were also assessed by sequencing. () Absolute lymphocyte count (ALC) (top), clonality of the recipient repertoire (middle), and similarity (Bhattacharyya coefficient) of the 001-006 recipient repertoire to the input donor repertoire (bottom) during the first posttransplant year. Posttransplant days of onset of grade I () and grade II () skin acute GVHD, start of immunosuppression with corticosteroids (), and chronic GVHD () are indicated by the dotted vertical lines. () Relative frequency in donor 001-006’s PB and BM of sequences that were observed in both physical compartments. The color of the point representing each sequence indicates the donor T cell phenotypic compartment in which that sequence was observed and from which it was sorted. ( and ) Left panels: Venn diagrams showing the overlap in unique sequences between recipient 001-006 posttransplant PB, donor 001-006 PB, and donor 001-006 BM for () all sequences or () the top first percentile of sequences. The sequences observed in the 3 recipient posttransplant samples (days +62, +188, and +363) were grouped together for this analysis. Right panels: Relative frequency in the donor or in the recipient at the indicated time points of the sequences that were observed in all 3 compartments (donor PB, donor BM, recipient PB). The color of the line representing each sequence indicates the donor T cell compartment (CD4+ naive, CD8+ naive, CD4+ memory, and CD8+ memory) in which that sequence was observed. sequences that could not be unambiguously assigned to a specific donor T cell compartment are coded as “unassigned.” UD, undetected.