We report the discovery of a claudin-low molecular subtype of high-grade bladder cancer that shares characteristics with the homonymous subtype of breast cancer. Claudin-low bladder tumors were enriched for multiple genetic features including increased rates of , , and mutations; increased frequency of amplification; decreased rates of , , and mutations; and decreased frequency of amplification. While claudin-low tumors showed the highest expression of immune gene signatures, they also demonstrated gene expression patterns consistent with those observed in active immunosuppression. This did not appear to be due to differences in predicted neoantigen burden, but rather was associated with broad upregulation of cytokine and chemokine levels from low activity, allowing unopposed activity. Taken together, these results define a molecular subtype of bladder cancer with distinct molecular features and an immunologic profile that would, in theory, be primed for immunotherapeutic response.

Identification of a claudin-low subtype in bladder cancer. 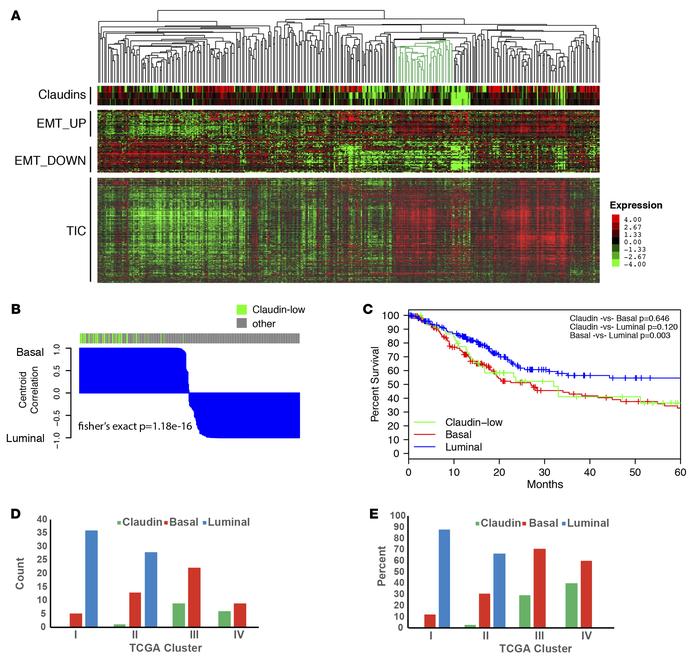 () Unsupervised clustering of TCGA muscle-invasive UC samples. Samples were clustered on the basis of expression of tight-junction claudins, a bidirectional EMT signature, and a TIC signature. The tumors identified as claudin-low are highlighted in green on the dendogram. = 408. () Waterfall plot showing correlation with the basal and luminal centroids as defined by BASE47 classification; claudin-low tumors are highlighted in green. Claudin-low tumors were significantly enriched in the BASE47 basal subtype (Fisher’s exact test = 1.18 × 10–16) and were highly correlated with the basal centroid (Pearson’s correlation = 9.33 × 10–15). = 408. () Kaplan-Meier plot showing overall survival of bladder cancer by molecular subtype. Significance was determined by log-rank testing with a Bonferroni correction. = 408. ( and ) Bar graphs showing the classification of TCGA UC tumors by TCGA mRNA cluster subtype ( axis) and our subtype classifications ( axis) by count and percentage. = 129. EMT, epithelial-to-mesenchymal transition; TCGA, The Cancer Genome Atlas; TIC, tumor-initiating cell; UC, urothelial carcinoma.