Preeclampsia (PE) is a disorder of pregnancy that manifests as late gestational maternal hypertension and proteinuria and can be life-threatening to both the mother and baby. It is believed that abnormal placentation is responsible for the cascade of events leading to the maternal syndrome. Embryo implantation is critical to establishing a healthy pregnancy. Defective implantation can cause adverse “ripple effects,” leading to abnormal decidualization and placentation, retarded fetal development, and poor pregnancy outcomes, such as PE and fetal growth restriction. The precise mechanism(s) of implantation defects that lead to PE remain elusive. BPH/5 mice, which spontaneously develop the cardinal features of PE, show peri-implantation defects including upregulation of Cox2 and IL-15 at the maternal-fetal interface. This was associated with decreased decidual natural killer (dNK) cells, which have important roles in establishing placental perfusion. Interestingly, a single administration of a Cox2 inhibitor (celecoxib) during decidualization restrained Cox2 and IL-15 expression, restored dNK cell numbers, improved fetal growth, and attenuated late gestational hypertension in BPH/5 female mice. This study provides evidence that decidual overexpression of Cox2 and IL-15 may trigger the adverse pregnancy outcomes reflected in the preeclamptic syndrome, underscoring the idea that Cox2 inhibitor treatment is an effective strategy for the prevention of PE-associated fetal and maternal morbidity and mortality. 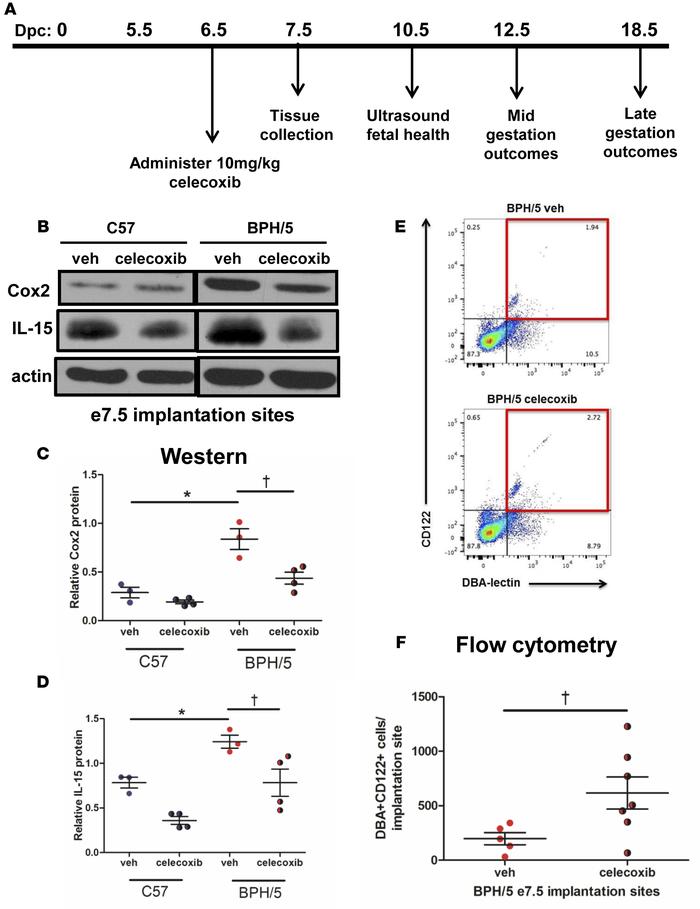