BACKGROUND Chronotherapy is a drug intervention at specific times of the day to optimize efficacy and minimize adverse effects. Its value in hematologic malignancy remains to be explored, in particular in adult patients.METHODS We performed chronotherapeutic analysis using 2 cohorts of patients with diffuse large B cell lymphoma (DLBCL) undergoing chemotherapy with a dichotomized schedule (morning or afternoon). The effect of a morning or afternoon schedule of rituximab plus cyclophosphamide, doxorubicin, vincristine, and prednisone (R-CHOP) on survival and drug tolerability was evaluated in a survival cohort (n = 210) and an adverse event cohort (n = 129), respectively. Analysis of about 14,000 healthy individuals followed to identify the circadian variation in hematologic parameters.RESULTS Both progression-free survival (PFS) and overall survival (OS) of female, but not male, patients were significantly shorter when patients received chemotherapy mostly in the morning (PFS HR 0.357, P = 0.033; and OS HR 0.141, P = 0.032). The dose intensity was reduced in female patients treated in the morning (cyclophosphamide 10%, P = 0.002; doxorubicin 8%, P = 0.002; and rituximab 7%, P = 0.003). This was mainly attributable to infection and neutropenic fever: female patients treated in the morning had a higher incidence of infections (16.7% vs. 2.4%) and febrile neutropenia (20.8% vs. 9.8%) as compared with those treated in the afternoon. The sex-specific chronotherapeutic effects can be explained by the larger daily fluctuation of circulating leukocytes and neutrophils in female than in male patients.CONCLUSION In female DLBCL patients, R-CHOP treatment in the afternoon can reduce toxicity while it improves efficacy and survival outcome.FUNDING National Research Foundation of Korea (NRF) grant funded by the Korean government (grant number NRF-2021R1A4A2001553), Institute for Basic Science IBS-R029-C3, and Human Frontiers Science Program Organization Grant RGY0063/2017. 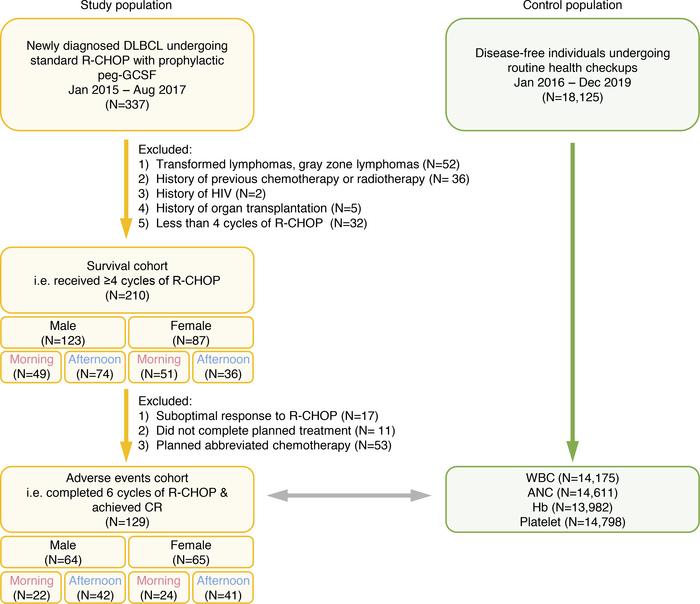