Consecutive mRNA vaccinations against SARS-CoV-2 reinforced both innate and adaptive immune responses. However, it remains unclear whether the enhanced innate immune responses are mediated by epigenetic regulation and, if so, whether these effects persist. Using mass cytometry, RNA-Seq, and ATAC-Seq, we show that BNT162b2 mRNA vaccination upregulated antiviral and IFN-stimulated gene expression in monocytes with greater effects after the second vaccination than those after the first vaccination. Transcription factor–binding motif analysis also revealed enriched IFN regulatory factors and PU.1 motifs in accessible chromatin regions. Importantly, although consecutive BNT162b2 mRNA vaccinations boosted innate immune responses and caused epigenetic changes in isolated monocytes, we show that these effects occurred only transiently and disappeared 4 weeks after the second vaccination. Furthermore, single-cell RNA-Seq analysis revealed that a similar gene signature was impaired in the monocytes of unvaccinated patients with COVID-19 with acute respiratory distress syndrome. These results reinforce the importance of the innate immune response in the determination of COVID-19 severity but indicate that, unlike adaptive immunity, innate immunity is not unexpectedly sustained even after consecutive vaccination. This study, which focuses on innate immune memory, may provide novel insights into the vaccine development against infectious diseases. 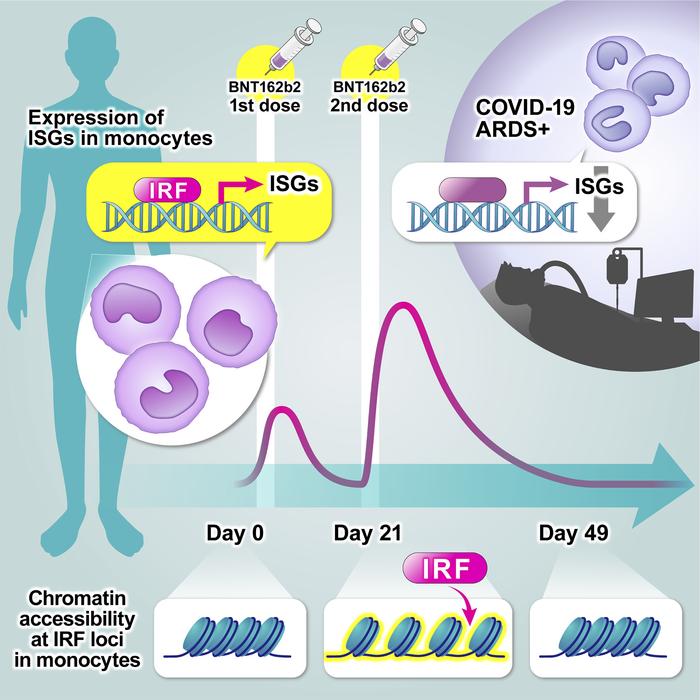