Pulmonary fibrosis is a chronic and progressive interstitial lung disease associated with the decay of pulmonary function, which leads to a fatal outcome. As an essential epigenetic regulator of DNA methylation, the involvement of ubiquitin-like containing PHD and RING finger domains 1 (UHRF1) in fibroblast activation remains largely undefined in pulmonary fibrosis. In the present study, we found that TGF-β1–mediated upregulation of UHRF1 repressed beclin 1 via methylated induction of its promoter, which finally resulted in fibroblast activation and lung fibrosis both in vitro and in vivo. Moreover, knockdown of UHRF1 significantly arrested fibroblast proliferation and reactivated beclin 1 in lung fibroblasts. Thus, intravenous administration of UHRF1 siRNA–loaded liposomes significantly protected mice against experimental pulmonary fibrosis. Accordingly, our data suggest that UHRF1 might be a novel potential therapeutic target in the pathogenesis of pulmonary fibrosis.

Loss and gain of function of beclin 1 reversed the effect of UHRF1 in fibroblasts. 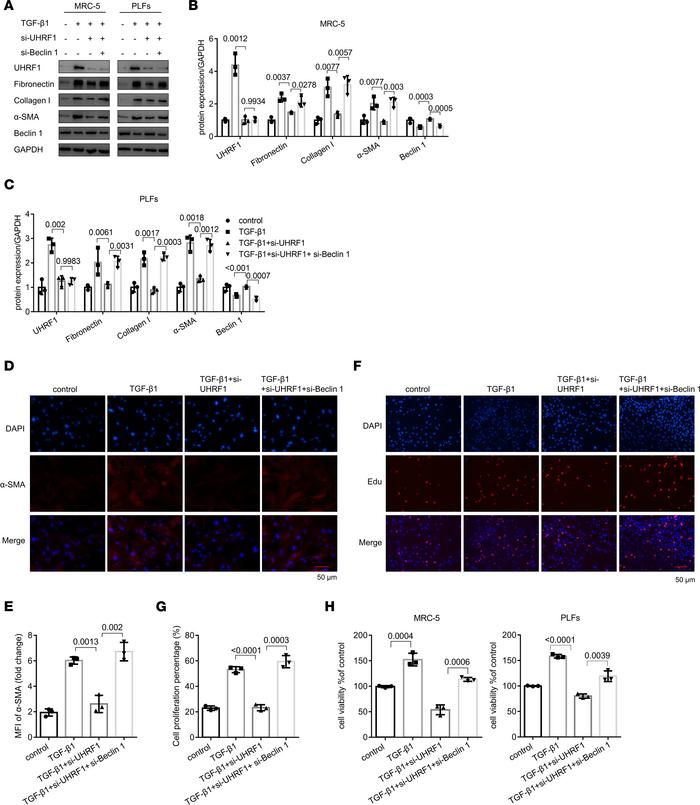