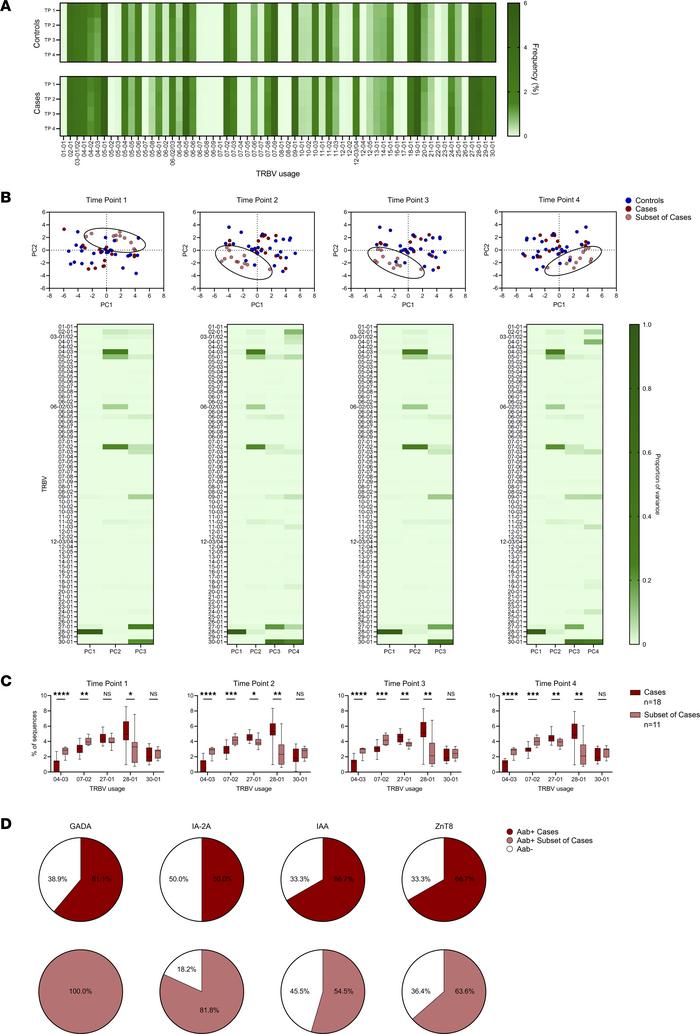 () Heatmaps of TCR-β V gene usage at the 4 time points in controls (top) and cases (bottom), with darker green indicating a higher frequency of a given gene. () Plots of principal component analyses depicting Vβ gene usage by individual at the 4 time points for controls (blue, 29), cases (dark red 18), and a subset of cases (light red, 11). Ellipses denote the same subset of cases throughout the 4 time points. Below each PCA plot is a heatmap quantifying the principal components (Vβ genes) contributing to the variance of each plot, with darker green indicating a higher proportion of the variance. () Box-and-whisker plots displaying Vβ gene usage accounting for the highest proportion of variance by cases (dark red, 18) and the subset of cases (light red, 11). The black center line denotes the median value (50th percentile), while the black box contains the 25th to 75th percentiles of the data set. The black whiskers mark the 10th and 90th percentiles. () Pie graphs showing the percentage of cases (dark red, top, 18) and the subset of cases (light red, bottom, 11) who developed each of the 4 islet autoantibodies tested: glutamic acid decarboxylase autoantibodies (GADA), tyrosine phosphatase–related islet antigen-2 autoantibodies (IA-2A), insulin autoantibodies (IAA), and zinc transporter 8 autoantibodies (ZnT8). Percentages of individuals in each group who were negative for each autoantibody are indicated in white. Time points in cases: 1, early in life; 2, before islet autoantibody positivity; 3, after islet autoantibody positivity; and 4, visit prior to clinical T1D diagnosis. Controls were age matched to cases at each time point. values were calculated using Mann-Whitney tests for Vβ gene usage in cases compared with the subset of cases at each time point. * 0.05, ** 0.01, *** 0.001, **** 0.0001.