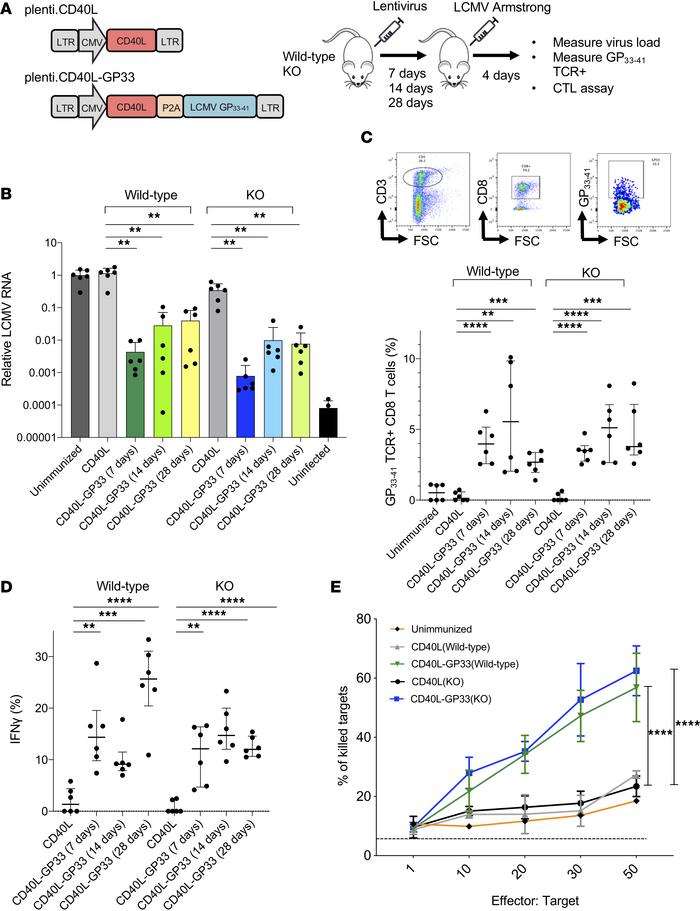 () The structures of the lentiviral vaccine vector CD40L-GP33 expressing CD40L and LCMV MHCI epitope GP33-41 (left) are shown. Wild-type and SAMHD1-KO mice ( = 6) were injected i.v. or i.p. with 3 × 106 IU of the viruses, and after 1, 2, or 4 weeks, the mice were challenged with LCMV Armstrong virus (right). Virus load, TCR+CD8+ T cells, and cytolytic activity were measured 4 days postinfection. () LCMV RNA copy numbers in the spleen of the immunized mice were quantified by quantitative reverse transcription PCR (qRT-PCR) ( = 6) 4 days postinfection. () Splenocytes from mice challenged 2 weeks postimmunization were stained with GP33 tetramer and antibodies against CD3 and CD8. CD3+CD8+ cells were gated, and the number of tetramer+ cells was determined. The gating strategy is shown (above) and the percentage of tetramer+CD8+ T cells was quantified. () The proportion of splenic GP33+TCR+CD8+ T cells expressing IFN-γ was quantified by flow cytometry. () Cytolytic activity of splenocytes from the immunized mice ( = 6) was measured in vitro. LB27.4 target cells were stained with CFSE and pulsed with GP33 peptide and then incubated for 24 hours with different numbers of effector splenocytes. The cells were then stained with viability dye eFluor 450 and the dead cells quantified by flow cytometry. Statistical significance was determined by Kruskal-Wallis test with post hoc Dunn’s test. Confidence intervals are shown as the mean ± SD. (** 0.01, *** 0.001, **** 0.0001.)