Uterine fibroids (leiomyomas) affect Black women disproportionately compared with women of other races and ethnicities in terms of prevalence, incidence, and severity of symptoms. The causes of this racial disparity are essentially unknown. We hypothesized that myometria of Black women are more susceptible to developing fibroids, and we examined the transcriptomic and DNA methylation profiles of myometria and fibroids from Black and White women for comparison. Myometrial samples cluster by race in both their transcriptome and DNA methylation profiles, whereas fibroid samples only cluster by race in the latter. More differentially expressed genes (DEGs) were detected in the Black and White myometrial sample comparison than in the fibroid comparison. Leiomyoma gene set expression analysis identified 4 clusters of DEGs, including a cluster of 24 genes with higher expression in myometrial samples from Black women. One of the DEGs in this group, von Willibrands factor (VWF), was significantly hypomethylated in both myometrial samples from Black women and in all fibroids at 2 CpG probes that are near a putative enhancer site and that are correlated with VWF expression levels. These results suggest that the molecular basis for the disparity in fibroid disease between Black and White women could be found in the myometria before fibroid development and not in the fibroids themselves.

Race-based clustering of RNA-Seq results from myometrial and fibroid samples. 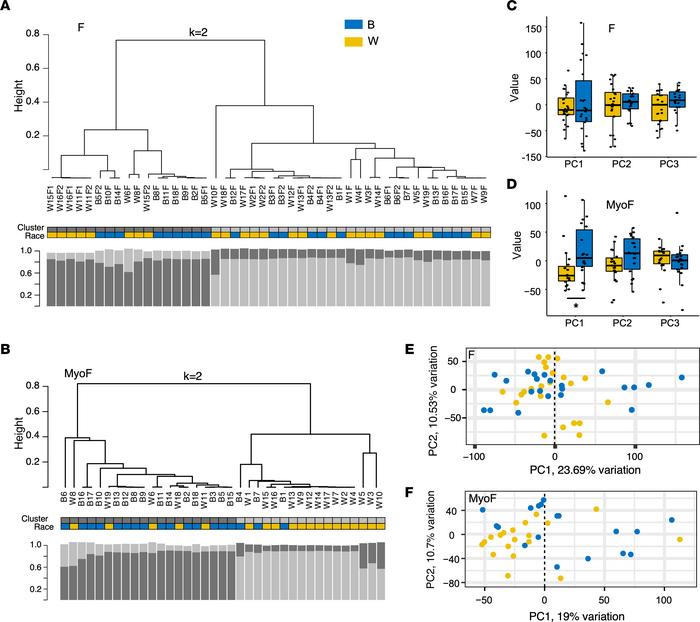 ( and ) Whereas unsupervised hierarchical = 2 means clustering of RNA-Seq results from mt fibroid samples ( = 24 F White and = 22 F Black) is not significantly associated with race (Fisher’s exact test, = 0.76) (), the results from myometrial samples ( = 19 MyoF White and = 18 MyoF Black) show an association with race (Fisher’s exact test, = 8.3 × 10–4) (). The length of each leaf in the dendrograms indicates degree of dissimilarity. Race of each sample is color coded as indicated. The clusters are shown above the race. Spearman bootstrap analyses (1,000×) are shown below each dendrogram for each sample. The axis of bootstrap columns indicates stability of clustering. ( and ) Box plots of the first 3 principal components (PC) of RNA-Seq results from Black and White F () and MyoF (). The value of each sample represents the individual gene expression values transformed by the rotation matrix estimated from the PCA. Only PC1 in MyoF are significantly different (likelihood ratio test, * = 0.03). ( and ) PC plot analyses for PC1 versus PC2 of F () and MyoF () shows samples from White and Black women in 2-dimensional space. Each dot represents 1 sample.