People living with multiple sclerosis (MS) experience episodic CNS white matter lesions instigated by autoreactive T cells. With age, patients with MS show evidence of gray matter demyelination and experience devastating nonremitting symptomology. What drives progression is unclear and studying this has been hampered by the lack of suitable animal models. Here, we show that passive experimental autoimmune encephalomyelitis (EAE) induced by an adoptive transfer of young Th17 cells induced a nonremitting clinical phenotype that was associated with persistent leptomeningeal inflammation and cortical pathology in old, but not young, SJL/J mice. Although the quantity and quality of T cells did not differ in the brains of old versus young EAE mice, an increase in neutrophils and a decrease in B cells were observed in the brains of old mice. Neutrophils were also found in the leptomeninges of a subset of progressive MS patient brains that showed evidence of leptomeningeal inflammation and subpial cortical demyelination. Taken together, our data show that while Th17 cells initiate CNS inflammation, subsequent clinical symptoms and gray matter pathology are dictated by age and associated with other immune cells, such as neutrophils. 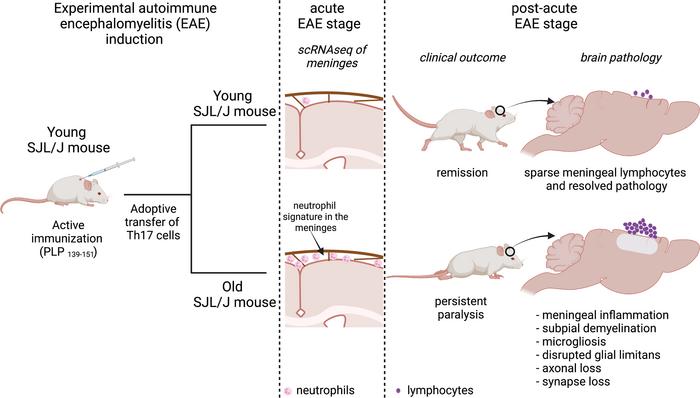