The androgen receptor (AR) is a master transcription factor that regulates prostate cancer (PC) development and progression. Inhibition of AR signaling by androgen deprivation is the first-line therapy with initial efficacy for advanced and recurrent PC. Paradoxically, supraphysiological levels of testosterone (SPT) also inhibit PC progression. However, as with any therapy, not all patients show a therapeutic benefit, and responses differ widely in magnitude and duration. In this study, we evaluated whether differences in the AR cistrome before treatment can distinguish between SPT-responding (R) and -nonresponding (NR) tumors. We provide the first preclinical evidence to our knowledge that SPT-R tumors exhibit a distinct AR cistrome when compared with SPT-NR tumors, indicating a differential biological role of the AR. We applied an integrated analysis of ChIP-Seq and RNA-Seq to the pretreatment tumors and identified an SPT-R signature that distinguishes R and NR tumors. Because transcriptomes of SPT-treated clinical specimens are not available, we interrogated available castration-resistant PC (CRPC) transcriptomes and showed that the SPT-R signature is associated with improved survival and has the potential to identify patients who would respond to SPT. These findings provide an opportunity to identify the subset of patients with CRPC who would benefit from SPT therapy. 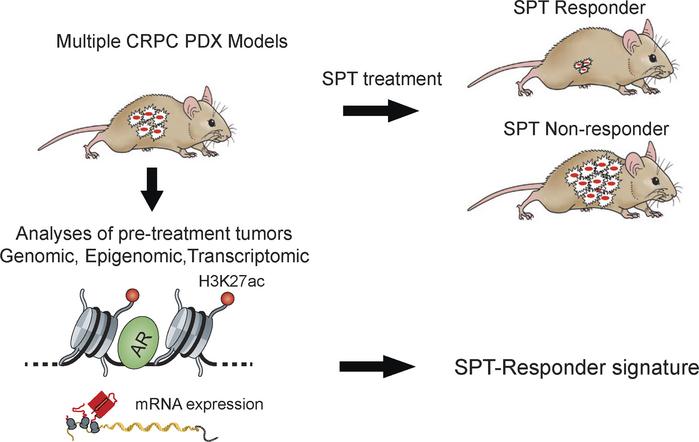