ÍSince the introduction of new generation pertussis vaccines, resurgence of pertussis has been observed in many developed countries. Former whole-cell pertussis (wP) vaccines are able to protect against disease and transmission but have been replaced in several industrialized countries because of their reactogenicity and adverse effects. Current acellular pertussis (aP) vaccines, made of purified proteins of Bordetella pertussis, are efficient at preventing disease but fail to induce long-term protection from infection. While the systemic and mucosal T cell immunity induced by the 2 types of vaccines has been well described, much less is known concerning B cell responses. Taking advantage of an inducible activation-induced cytidine deaminase fate-mapping mouse model, we compared effector and memory B cells induced by the 2 classes of vaccines and showed that a stronger and broader memory B cell and plasma cell response was achieved by a wP prime. We also observed that homologous or heterologous vaccine combinations that include at least 1 wP administration, even as a booster dose, were sufficient to induce this broad effector response, thus highlighting its dominant imprint on the B cell profile. Finally, we describe the settlement of memory B cell populations in the lung following subcutaneous wP prime vaccination. 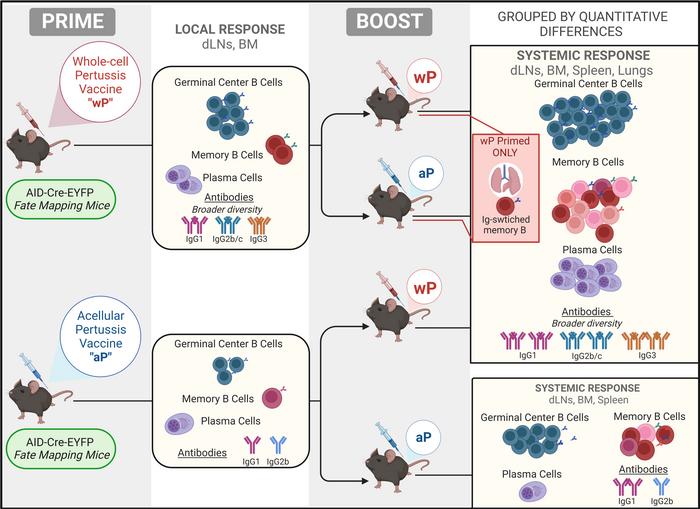