SNHG12, a long noncoding RNA (lncRNA) dysregulated in atherosclerosis, is known to be a key regulator of vascular senescence in endothelial cells (ECs). However, its role in angiogenesis and peripheral artery disease has not been elucidated. Hind-limb ischemia studies using femoral artery ligation (FAL) in mice showed that SNHG12 expression falls readily in the acute phase of the response to limb ischemia in gastrocnemius muscle and recovers to normal when blood flow recovery is restored to ischemic muscle, indicating that it likely plays a role in the angiogenic response to ischemia. Gain- and loss-of-function studies demonstrated that SNHG12 regulated angiogenesis — SNHG12 deficiency reduced cell proliferation, migration, and endothelial sprouting, whereas overexpression promoted these angiogenic functions. We identified SNHG12 binding partners by proteomics that may contribute to its role in angiogenesis, including IGF-2 mRNA–binding protein 3 (IGF2BP3, also known as IMP3). RNA-Seq profiling of SNHG12-deficient ECs showed effects on angiogenesis pathways and identified a strong effect on cell cycle regulation, which may be modulated by IMP3. Knockdown of SNHG12 in mice undergoing FAL using injected gapmeRs) decreased angiogenesis, an effect that was more pronounced in a model of insulin-resistant db/db mice. RNA-Seq profiling of the EC and non-EC compartments in these mice revealed a likely role of SNHG12 knockdown on Wnt, Notch, and angiopoietin signaling pathways. Together, these findings indicate that SNHG12 plays an important role in the angiogenic EC response to ischemia. 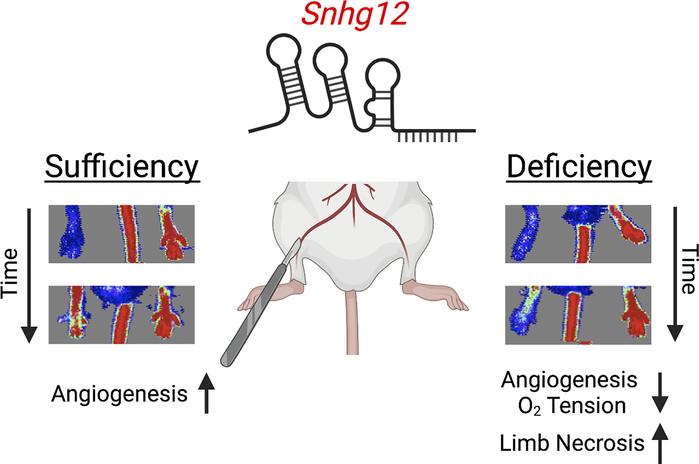