Nox2 is a ROS-generating enzyme, deficiency of which increases suppression by Tregs in vitro and in an in vivo model of cardiac remodeling. As Tregs have emerged as a candidate therapy in autoimmunity and transplantation, we hypothesized that Nox2 deficiency in Tregs in recipient mice may improve outcomes in a heart transplant model. We generated a potentially novel B6129 mouse model with Treg-targeted Nox2 deletion (Nox2fl/flFoxP3Cre+ mice) and transplanted with hearts from CB6F1 donors. As compared with those of littermate controls, Nox2fl/flFoxP3Cre+ mice had lower plasma levels of alloantibodies and troponin-I, reduced levels of IFN-γ in heart allograft homogenates, and diminished cardiomyocyte necrosis and allograft fibrosis. Single-cell analyses of allografts revealed higher absolute numbers of Tregs and lower CD8+ T cell infiltration in Nox2-deficient recipients compared with Nox2-replete mice. Mechanistically, in addition to a greater suppression of CD8+CD25– T effector cell proliferation and IFN-γ production, Nox2-deficient Tregs expressed higher levels of CCR4 and CCR8, driving cell migration to allografts; this was associated with increased expression of miR-214-3p. These data indicate that Nox2 deletion in Tregs enhances their suppressive ability and migration to heart allografts. Therefore, Nox2 inhibition in Tregs may be a useful approach to improve their therapeutic efficacy. 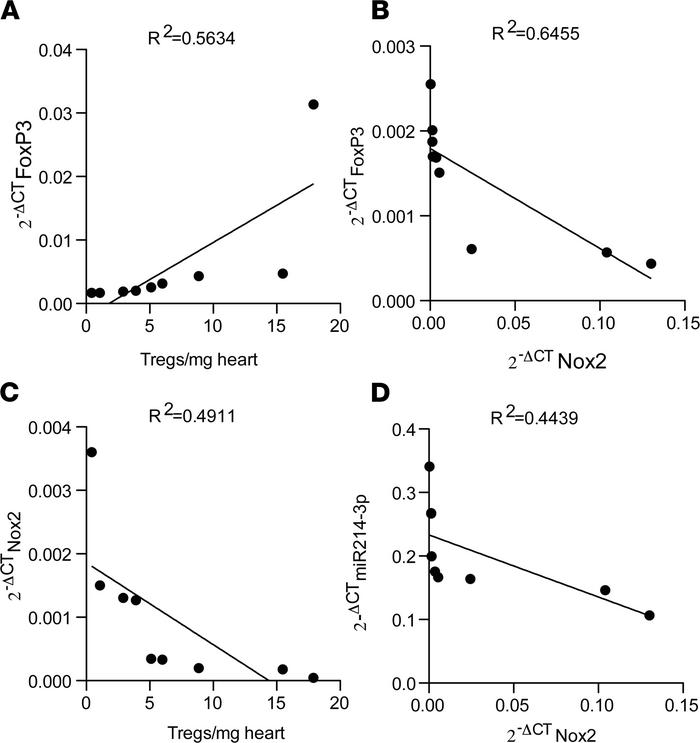