Clinical phenotyping of term and preterm labor is imprecise, and disagreement persists on categorization relative to underlying pathobiology, which remains poorly understood. We performed RNA sequencing (RNA-seq) of 31 specimens of human uterine myometrium from 10 term and 21 preterm cesarean deliveries with rich clinical context information. A molecular signature of 4814 transcripts stratified myometrial samples into quiescent (Q) and nonquiescent (NQ) phenotypes, independent of gestational age and incision site. Similar stratifications were achieved using expressed genes in Ca2+ signaling and TGF-β pathways. For maximal parsimony, we evaluated the expression of just 2 Ca2+ transporter genes, ATP2B4 (encoding PMCA4) and ATP2A2 (coding for SERCA2), and we found that their ratio reliably distinguished NQ and Q specimens in the current study, and also in 2 publicly available RNA-seq data sets (GSE50599 and GSE80172), with an overall AUC of 0.94. Cross-validation of the ATP2B4/ATP2A2 ratio by quantitative PCR in an expanded cohort (by 11 additional specimens) achieved complete separation (AUC of 1.00) of NQ versus Q specimens. While providing additional insight into the associations between clinical features of term and preterm labor and myometrial gene expression, our study also offers a practical algorithm for unbiased classification of myometrial biopsies by their overall contractile program. 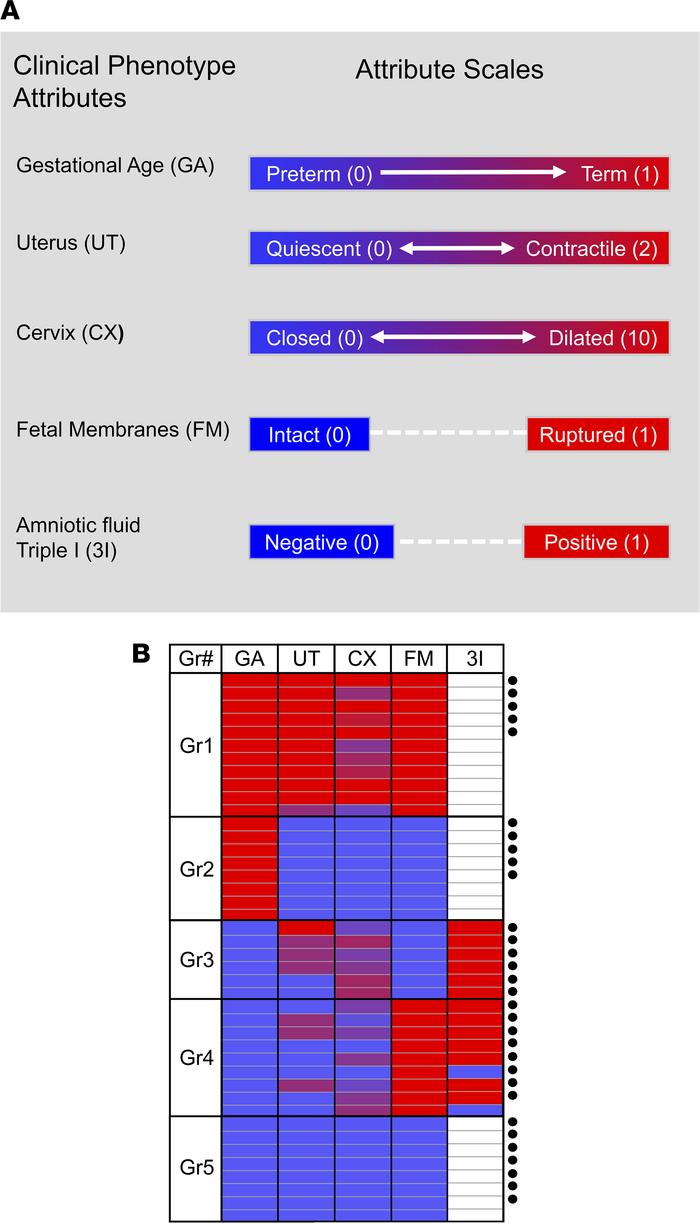 () Graphical summary of clinical phenotypic attributes included as part of the classification algorithm used in this study. Gestational age was established clinically based on last menstrual period and/or ultrasonographic examination prior to 20 weeks (wk) of gestation and dichotomized into term (1, delivery > 37 wk of gestation) and preterm (0, delivery < 34 wk of gestation) cases. Uterine contractions were scored semiquantitatively on a scale from 0 to 2 (0, absent; 1, irregular, not followed by cervical change or when contractions receded after tocolysis; or 2, regular and followed by cervical change). Cervical dilation was scored on a scale from 0 to 10 cm as recorded on the last exam prior to cesarean. Membrane status was scored as 0 (intact) or 1 (ruptured). Triple I was scored as 0 (absent) or 1 (confirmed or suspected). () Heatmap of clinical characteristics for all cases included in the current study. Cases were aggregated into 5 groups as follows: Gr1, term birth following spontaneous onset of term labor (TL); Gr2, term birth by elective cesarean section not in labor (TNL); Gr3, PTB following spontaneous preterm labor with intact membranes (PTB-sPTL); Gr4, PTB following PPROM (PTB-PPROM); and Gr5, provider-initiated PTB in the absence of active labor contractions, cervical dilation, or membrane rupture (PTB-PI). Additional phenotyping of cases spontaneously committed to PTBs (Gr3 and Gr4) involved presence or absence of Triple I based on cultures of amniotic fluid obtained via clinically indicated amniocentesis as described in prior studies. The circular symbols to the right of the image denote samples that were included in the exploratory phase of the study.