In the current study, we followed 839 household contacts (HHCs) of tuberculosis (TB) patients for 2 years and identified the factors that enhanced the development of TB. Fourteen of the 17 HHCs who progressed to TB were in the 15- to 30-year-old age group. At baseline (the “0“ time point, when all the individuals were healthy), the concentration of the thyroid hormone thyroxine (T4) was lower, and there were increased numbers of Tregs in PBMCs of TB progressors. At baseline, PBMCs from TB progressors stimulated with early secretory antigenic target 6 (ESAT-6) and 10 kDa culture filtrate antigen (CFP-10) produced less IL-1α. Thyroid hormones inhibited Mycobacterium tuberculosis (Mtb) growth in macrophages in an IL-1α–dependent manner. Mtb-infected Thra1PV/+ (mutant thyroid hormone receptor) mice had increased mortality and reduced IL-1α production. Our findings suggest that young HHCs who exhibit decreased production of thyroid hormones are at high risk of developing active TB disease. 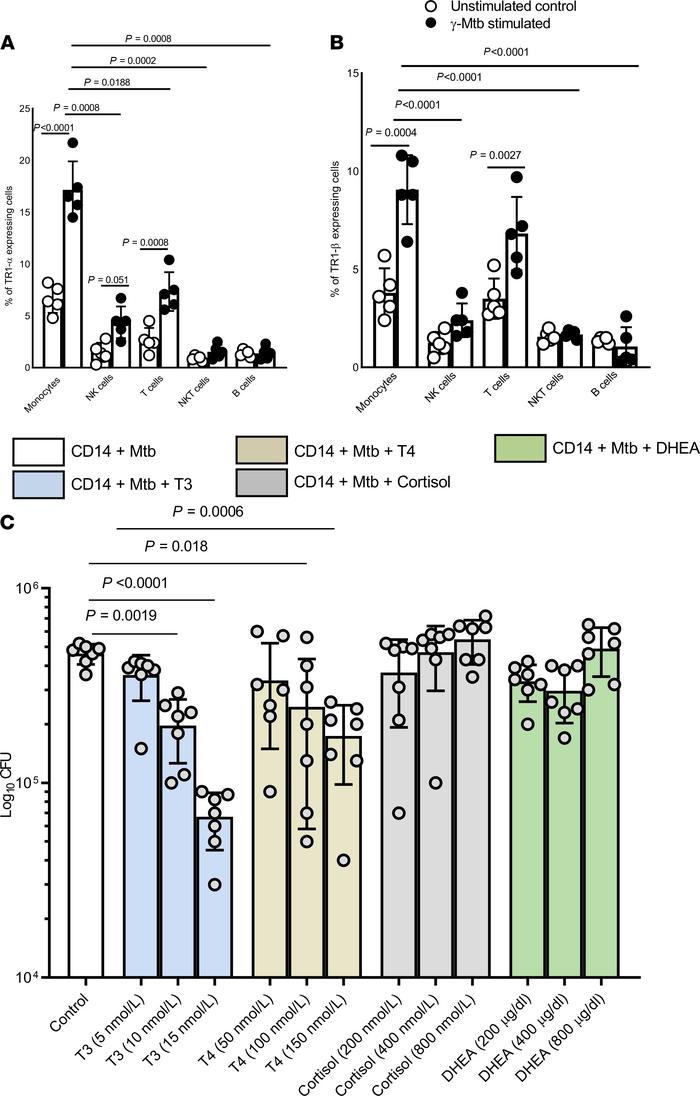 Freshly isolated PBMCs from 5 healthy individuals (age range: 18–30 years) were cultured with or without γ-irradiated Mtb H37Rv (γ-Mtb, 10 μg/mL) for 120 hours. () The percentages of TR1-α+ and () TR1-β+ cells among monocytes, NK cells, T cells, NKT cells, and B cells were determined by flow cytometry. values were determined using 1-way ANOVA with Tukey’s multiple-comparison test. The mean values, SD, and values are shown. () Mtb growth in monocyte-derived macrophages (MDMs). The MDMs from healthy individuals ( = 7) were infected with H37Rv at an MOI of 2.5 as described in Methods. Some of the infected MDMs were cultured in the presence of T3 (5, 10, 15 nmol/L), T4 (50, 100, 150 nmol/L), DHEA (200, 400, 800 μg/dl), or cortisol (200, 400, 800 nmol/L) for 5 days. The supernatant was aspirated, and the MDMs were lysed. Supernatant was centrifuged to pellet the bacteria, and the pellets were added to the cell lysates. The bacterial suspensions were ultrasonically dispersed, serially diluted, and plated in triplicate on 7H10 agar. The number of resultant colonies was counted after 3 weeks. The values were derived using an unpaired, 2-tailed, independent test. The mean values and SD are shown for the number of CFUs per well.