Similar to tumor-initiating cells (TICs), minimal residual disease (MRD) is capable of reinitiating tumors and causing recurrence. However, the molecular characteristics of solid tumor MRD cells and drivers of their survival have remained elusive. Here we performed dense multiregion transcriptomics analysis of paired biopsies from 17 ovarian cancer patients before and after chemotherapy. We reveal that while MRD cells share important molecular signatures with TICs, they are also characterized by an adipocyte-like gene expression signature and a portion of them had undergone epithelial-mesenchymal transition (EMT). In a cell culture MRD model, MRD-mimic cells showed the same phenotype and were dependent on fatty acid oxidation (FAO) for survival and resistance to cytotoxic agents. These findings identify EMT and FAO as attractive targets to eradicate MRD in ovarian cancer and make a compelling case for the further testing of FAO inhibitors in treating MRD.

Intraoperative identification and sampling of MRD in ovarian cancer patients. 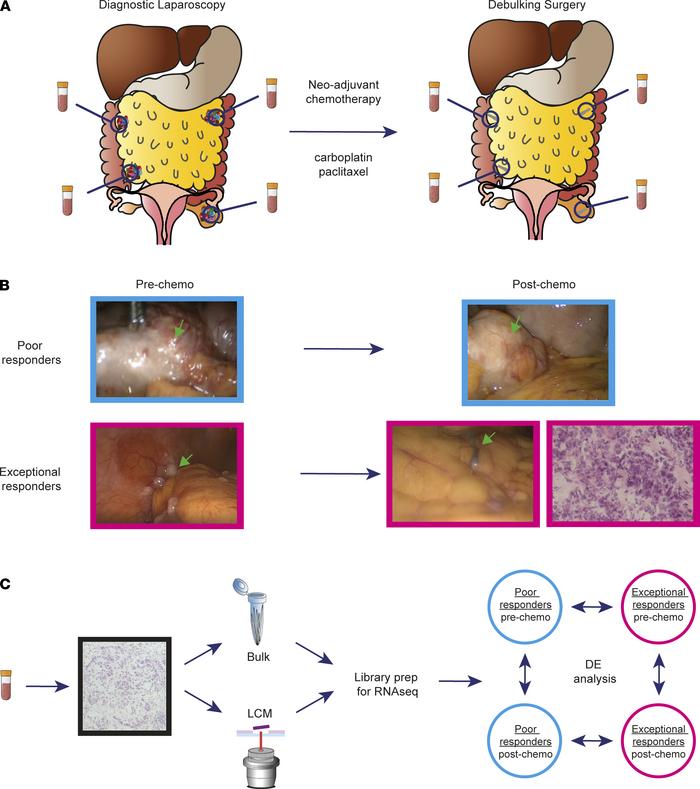 () Diagram shows the sampling technique used in the OXO-PCR study. All 17 patients had paired biopsies collected at the time of diagnostic laparoscopy (pre-chemo) and during the IDS that followed at least 3 cycles of NACT (post-chemo). () Representative images showing the tumor burden in poor and exceptional responders before and after treatment. The MRD cancer islets are not visible during the IDS and can only be detected with a hematoxylin-and-eosin staining of the biopsy. () Diagram shows the RNA-Seq pipeline. Each biopsy was cryosectioned, stained, and assessed by a gynecological oncology pathologist to confirm presence of cancer cells; RNA-Seq libraries were prepared from both bulk and laser capture microdissected material, followed by differential expression analysis across time points and response groups.