Voltage-gated hydrogen channel 1 (Hvcn1) is a voltage-gated proton channel, which reduces cytosol acidification and facilitates the production of ROS. The increased expression of this channel in some cancers has led to proposing Hvcn1 antagonists as potential therapeutics. While its role in most leukocytes has been studied in depth, the function of Hvcn1 in T cells remains poorly defined. We show that Hvcn1 plays a nonredundant role in protecting naive T cells from intracellular acidification during priming. Despite sharing overall functional impairment in vivo and in vitro, Hvcn1-deficient CD4+ and CD8+ T cells display profound differences during the transition from naive to primed T cells, including in the preservation of T cell receptor (TCR) signaling, cellular division, and death. These selective features result, at least in part, from a substantially different metabolic response to intracellular acidification associated with priming. While Hvcn1-deficient naive CD4+ T cells reprogram to rescue the glycolytic pathway, naive CD8+ T cells, which express high levels of this channel in the mitochondria, respond by metabolically compensating mitochondrial dysfunction, at least in part via AMPK activation. These observations imply heterogeneity between adaptation of naive CD4+ and CD8+ T cells to intracellular acidification during activation. 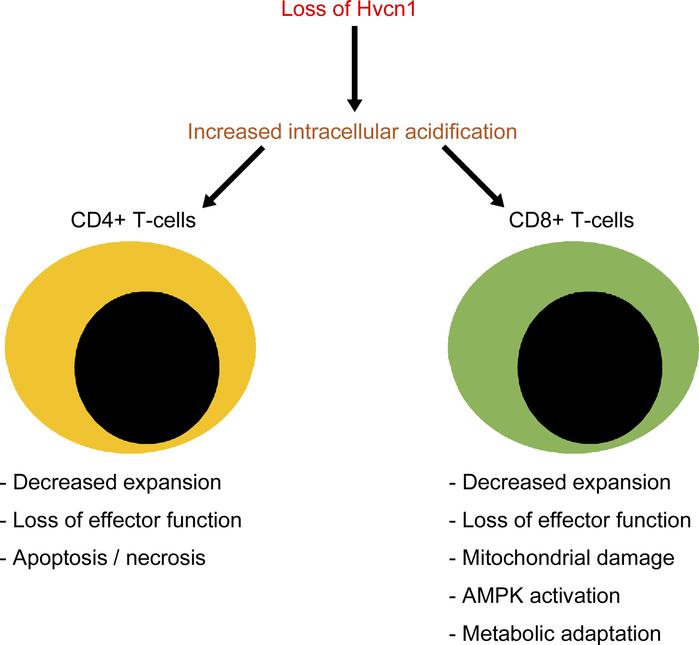