The foreskin is a site of heterosexual acquisition of HIV-1 among uncircumcised men. However, some men remain HIV-negative despite repeated, unprotected vaginal intercourse with HIV-positive partners, while others become infected after few exposures. The foreskin microbiome includes a diverse group of anaerobic bacteria that have been linked to HIV acquisition. However, these anaerobes tend to coassociate, making it difficult to determine which species might increase HIV risk and which may be innocent bystanders. Here, we show that 6 specific anaerobic bacterial species, Peptostreptococcus anaerobius, Prevotella bivia, Prevotella disiens, Dialister propionicifaciens, Dialister micraerophilus, and a genetic near neighbor of Dialister succinatiphilus, significantly increased cytokine production, recruited HIV-susceptible CD4+ T cells to the inner foreskin, and were associated with HIV acquisition. This strongly suggests that the penile microbiome increases host susceptibility to HIV and that these species are potential targets for microbiome-based prevention strategies. 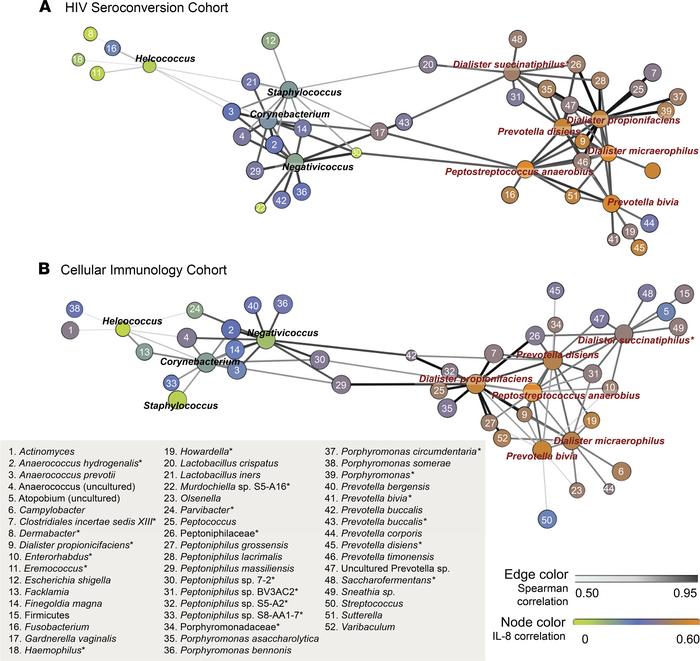 Penile microbiome network structures are conserved across 2 independent study cohorts, the HIV seroconversion cohort ( = 188) () and the cellular immunology cohort ( = 90) (). Network structure displays the correlation of the 6 BASIC species and their 10 most correlated genera/species (species are listed). Correlation between species is denoted by the spatial location of nodes and edge color; node size displays species prevalence. Species-level correlations with subpreputial IL-8 are displayed by node color. Correlations were assessed by Spearman’s test.