Resistance to AR signaling inhibitors (ARSis) in a subset of metastatic castration-resistant prostate cancers (mCRPCs) occurs with the emergence of AR– neuroendocrine prostate cancer (NEPC) coupled with mutations/deletions in PTEN, TP53, and RB1 and the overexpression of DNMTs, EZH2, and/or SOX2. To resolve whether the lack of AR is the driving factor for the emergence of the NE phenotype, molecular, cell, and tumor biology analyses were performed on 23 xenografts derived from patients with PC, recapitulating the full spectrum of genetic alterations proposed to drive NE differentiation. Additionally, phenotypic response to CRISPR/Cas9-mediated AR KO in AR+ CRPC cells was evaluated. These analyses document that (a) ARSi-resistant NEPC developed without androgen deprivation treatment; (b) ARS in ARSi-resistant AR+/NE+ double-positive “amphicrine” mCRPCs did not suppress NE differentiation; (c) the lack of AR expression did not necessitate acquiring a NE phenotype, despite concomitant mutations/deletions in PTEN and TP53, and the loss of RB1 but occurred via emergence of an AR–/NE– double-negative PC (DNPC); (d) despite DNPC cells having homogeneous genetic driver mutations, they were phenotypically heterogeneous, expressing basal lineage markers alone or in combination with luminal lineage markers; and (e) AR loss was associated with AR promoter hypermethylation in NEPCs but not in DNPCs. 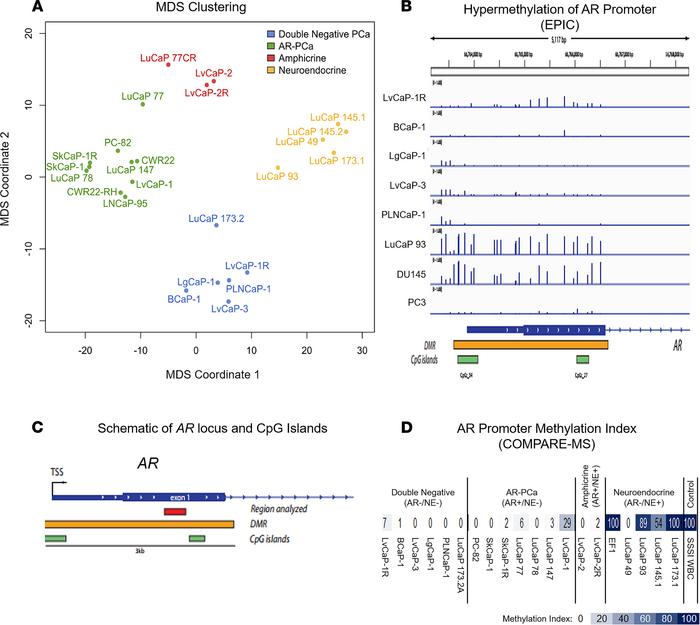 () Clustering of PDX models based on multidimensional scaling. () Analysis of methylation levels at the single CpG level using Illumina EPIC arrays reveals hypermethylation of a region encompassing the transcriptional start site and the first exon of in LuCaP 93 and DU145 cells. () Schematic of the locus showing CpG islands, the putative differentially methylated region, and the region interrogated in this COMPARE-MS study. () Heat map of methylation indices in the first exon of AR in PDX lines as assessed by COMPARE-MS. mCRPC, metastatic castration-resistant prostate cancer; PDXs, patient-derived xenografts.