Nephrogenic diabetes insipidus (NDI) patients produce large amounts of dilute urine. NDI can be congenital, resulting from mutations in the type-2 vasopressin receptor (V2R), or acquired, resulting from medications such as lithium. There are no effective treatment options for NDI. Activation of PKA is disrupted in both congenital and acquired NDI, resulting in decreased aquaporin-2 phosphorylation and water reabsorption. We show that adenosine monophosphate–activated protein kinase (AMPK) also phosphorylates aquaporin-2. We identified an activator of AMPK, NDI-5033, and we tested its ability to increase urine concentration in animal models of NDI. NDI-5033 increased AMPK phosphorylation by 2.5-fold, confirming activation. It increased urine osmolality in tolvaptan-treated NDI rats by 30%–50% and in V2R-KO mice by 50%. Metformin, another AMPK activator, can cause hypoglycemia, which makes it a risky option for treating NDI patients, especially children. Rats with NDI receiving NDI-5033 showed no hypoglycemia in a calorie-restricted, exercise protocol. Congenital NDI therapy needs to be effective long-term. We administered NDI-5033 for 3 weeks and saw no reduction in efficacy. We conclude that NDI-5033 can improve urine concentration in animals with NDI and holds promise as a potential therapy for patients with congenital NDI due to V2R mutations. 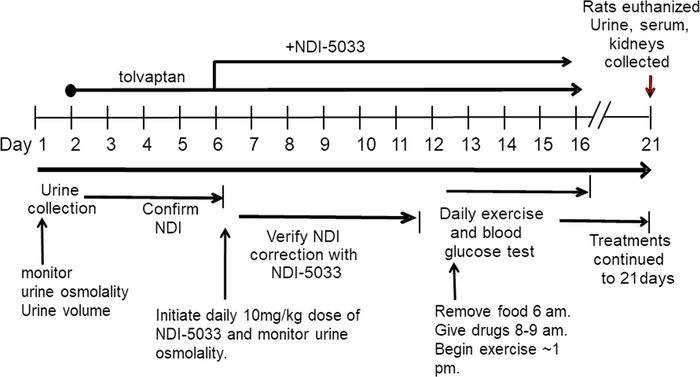 Urine was collected over 24 hours; then, tolvaptan (10 mg/kg/day) was delivered by gavage feeding daily. Osmolality was monitored for 3 days to verify development of NDI. NDI-5033 treatment by gavage feeding was initiated and given daily for up to 20 days, with daily urine collection for osmolality determination. On day 12, food was removed, mice ere exercised for 30 minutes, NDI-5033 was given, and then food was restored. This was repeated for 5 exercise days. Blood glucose was determined immediately before and after exercise.