Tenascin-C (TNC), an extracellular matrix protein that has proinflammatory properties, is a recently described antibody target in rheumatoid arthritis (RA). In this study, we utilized a systematic discovery process and identified 5 potentially novel citrullinated TNC (cit-TNC) T cell epitopes. CD4+ T cells specific for these epitopes were elevated in the peripheral blood of subjects with RA and showed signs of activation. Cit-TNC–specific T cells were also present among synovial fluid T cells and secreted IFN-γ. Two of these cit-TNC T cell epitopes were also recognized by antibodies within the serum and synovial fluid of individuals with RA. Detectable serum levels of cit-TNC–reactive antibodies were prevalent among subjects with RA and positively associated with cyclic citrullinated peptide (CCP) reactivity and the HLA shared epitope. Furthermore, cit-TNC–reactive antibodies were correlated with rheumatoid factor and elevated in subjects with a history of smoking. This work confirms cit-TNC as an autoantigen that is targeted by autoreactive CD4+ T cells and autoantibodies in patients with RA. Furthermore, our findings raise the possibility that coinciding epitopes recognized by both CD4+ T cells and B cells have the potential to amplify autoimmunity and promote the development and progression of RA.

Cit-TNC17 and cit-TNC56 are citrullinated epitopes that are recognized by ACPA in patients with RA. 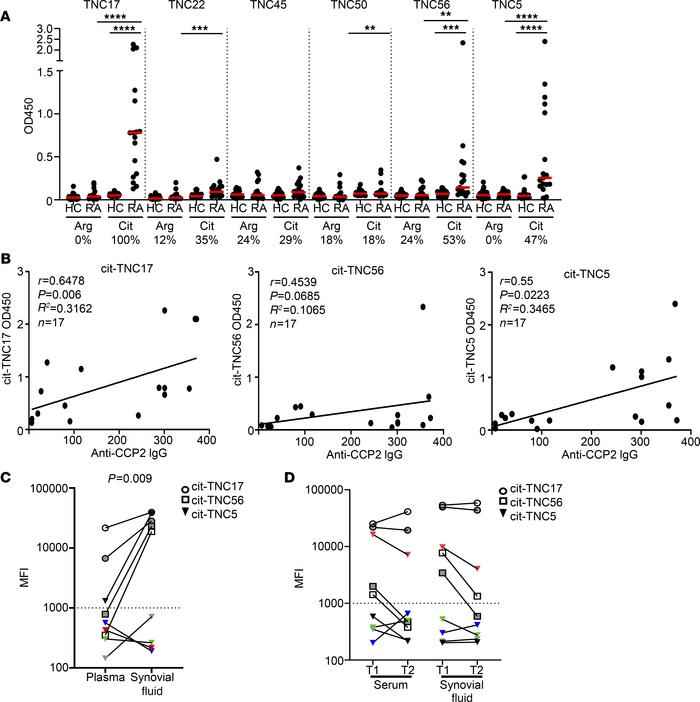 Antibody responses to cit-TNC peptides or their arginine counterparts in serum from patients with RA and HC subjects were measured by ELISA. Numbers below axis indicate percentage of subjects in each cohort that were seropositive. Each symbol represents an individual subject, and the horizontal line shows the median. () Antibodies to cit-TNC17, cit-TNC56 and cit-TNC5 were detected in 100%, 53%, and 47% of CCP+ RA subjects ( = 17), respectively, but not in HC subjects ( = 24), with little or no antibody response against the corresponding arg-TNC peptides. Each peptide was run on 1 plate, and each peptide pair (arg/cit) was run at the same day. values were calculated using a Mann-Whitney test. (** < 0.01, *** < 0.001, and **** < 0.001). () CCP2 antibody levels correlated significantly with the antibody levels for both cit-TNC17 and cit-TNC5, but not cit-TNC56 (Spearman’s correlation coefficient, * < 0.05). () Antibody reactivity to cit-TNC peptides was stronger in polyclonal anti-CCP pools from synovial fluid than plasma. Cutoff for positivity is 1000, and values were calculated using a paired 2-tailed Student’s test. () cit-TNC antibody reactivity over time in paired serum and synovial fluid samples from a single RA subject. T, time point. The different colors in and indicate the specific peptides tested in the microarray (see ).