Macrophage-mediated inflammatory response has been implicated in the pathogenesis of obesity and insulin resistance. Brd4 has emerged as a key regulator in the innate immune response. However, the role of Brd4 in obesity-associated inflammation and insulin resistance remains uncharacterized. Here, we demonstrated that myeloid lineage-specific Brd4 knockout (Brd4-CKO) mice were protected from high-fat diet–induced (HFD-induced) obesity with less fat accumulation, higher energy expenditure, and increased lipolysis in adipose tissue. Brd4-CKO mice fed a HFD also displayed reduced local and systemic inflammation with improved insulin sensitivity. RNA-Seq of adipose tissue macrophages (ATMs) from HFD-fed WT and Brd4-CKO mice revealed that expression of antilipolytic factor Gdf3 was significantly decreased in ATMs of Brd4-CKO mice. We also found that Brd4 bound to the promoter and enhancers of Gdf3 to facilitate PPARγ-dependent Gdf3 expression in macrophages. Furthermore, Brd4-mediated expression of Gdf3 acted as a paracrine signal targeting adipocytes to suppress the expression of lipases and the associated lipolysis in cultured cells and mice. Controlling the expression of Gdf3 in ATMs could be one of the mechanisms by which Brd4 modulates lipid metabolism and diet-induced obesity. This study suggests that Brd4 could be a potential therapeutic target for obesity and insulin resistance. 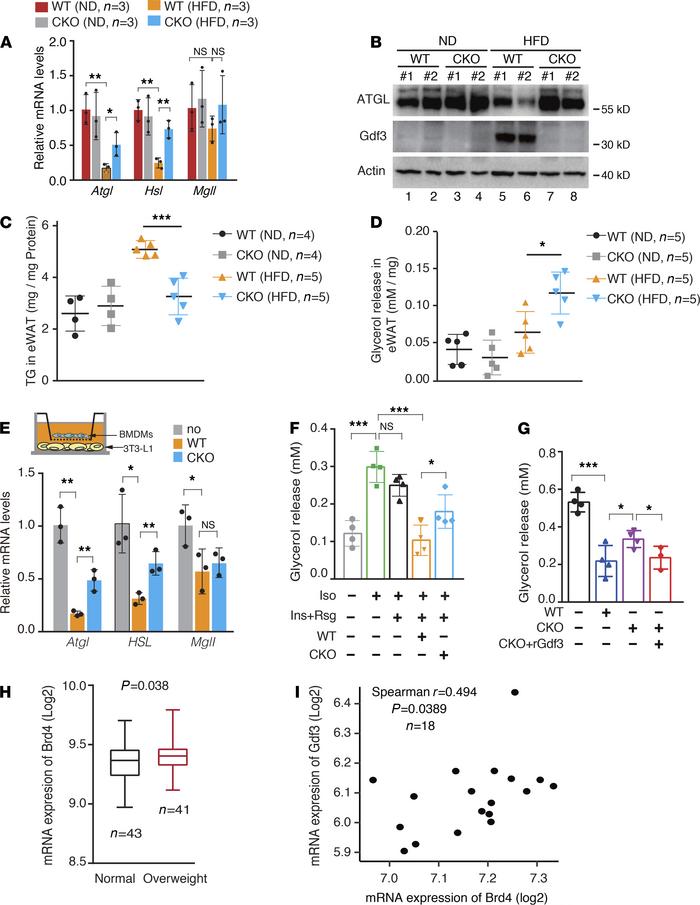