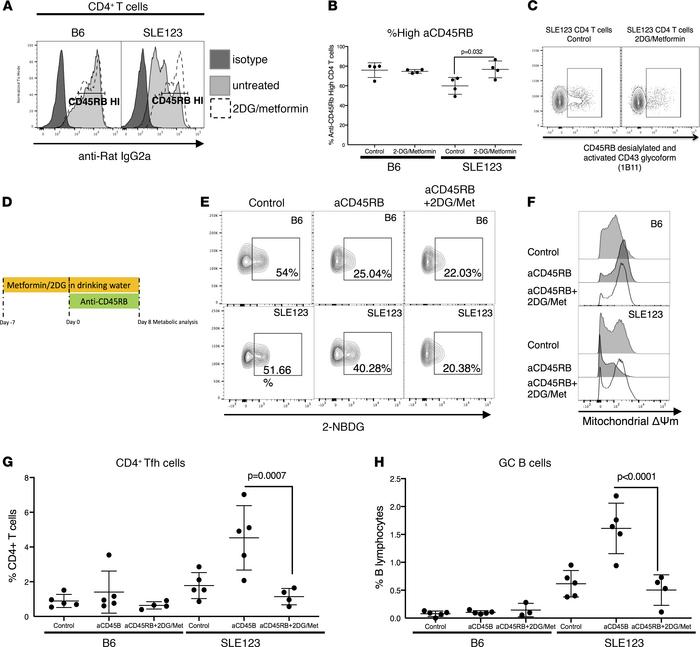 ( and ) We predicted treatment of SLE123 mice with 2DG and metformin for 1 week would improve the binding of aCD45RB to CD4+ T cells. Treatment with these metabolic therapies improved the binding of aCD45RB (dotted line) as compared with untreated controls (gray histogram). Quantified in . Representative of 2 experimental repeats, with at least 4 biologic replicates of 9- to 12-week-old female mice in each group. () Treatment of SLE123 mice with 2DG/Met reduced the binding of antibody 1B11 that detects desialylated CD45RB. ( and ) B6 and SLE123 mice were treated with 2DG/Met for 1 week before starting aCD45RB and continued for an additional week concomitant with aCD45RB. At the end of this treatment, mice were sacrificed, and metabolic parameters and cell subsets were analyzed. () Treatment with metabolic modulators + aCD45RB restored the metabolic regulation by aCD45RB in SLE123 CD4+ T cells. ( and ) This triple therapy also reduced the expansion of Tfh and GC B cells. Analyzed using a 1-way ANOVA followed by Tukey’s multiple comparison test. In –, = 5, 9- to 12-week-old female mice per group. (Control and aCD45RB-treated mice are also shown in .)