CD4 surface expression of CD45RB and global glycosylation are altered in SLE123 mice. 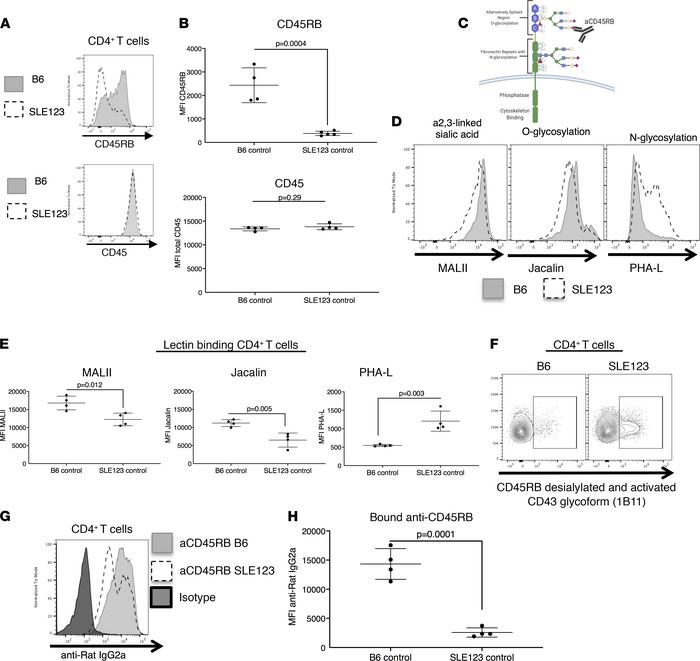 ( and ) Cell surface expression of CD45RB and total CD45 were measured by flow cytometry on CD4+ T cells. SLE123 demonstrated a downregulation of CD45RB on the cell surface as compared with B6 CD4+ T cells. There was no difference in pan-CD45 expression. Quantified in . () CD45 is composed of an intracellular region that controls cytoskeletal binding and its phosphatase activity. The extracellular domain is composed of a region with fibronectin repeats that is heavily N-glycosylated. An alternatively spliced region is heavily O-glycosylated, and this region imparts unique functions to each CD45 isoform. Additionally, a sialic acid residue on the B portion of this region is essential for the binding of therapeutic aCD45RB. ( and ) We utilized lectins to detect the level of α-2,3–linked sialylation (MALII), O-linked glycosylation (Jacalin), and N-linked glycosylation (PHA-L) in CD4+ T cells from B6 and SLE123 mice. We determined SLE123 CD4+ T cells had reduced levels of α-2,3–linked sialic acids and O-glycosylation and an increase in N-glycosylation. Quantified in . () Utilizing an antibody that detects a desialylated form of anti-CD45RB, we determined SLE123 CD4+ T cells possessed increased binding of this antibody compared with B6. ( and ) To determine the binding of therapeutic aCD45RB to B6 and SLE123 CD4+ T cells, we incubated splenocytes from both strains with aCD45RB, followed by an anti–rat IgG2a antibody conjugated to phycoerythrin. Flow cytometry demonstrated CD4+ T cells from SLE123 mice had reduced binding of the therapeutic antibody. Quantified in . Analyzed using a Student’s test. Representative data of at least 4 experimental repeats, with at least 3 biologic replicates of 9- to 12-week-old mice in each group.