The rapid spread of severe acute respiratory syndrome coronavirus 2 (SARS-CoV-2), coupled with a lack of therapeutics, has paralyzed the globe. Although significant effort has been invested in identifying antibodies that block infection, the ability of antibodies to target infected cells through Fc interactions may be vital to eliminate the virus. To explore the role of Fc activity in SARS-CoV-2 immunity, the functional potential of a cross–SARS-reactive antibody, CR3022, was assessed. CR3022 was able to broadly drive antibody effector functions, providing critical immune clearance at entry and upon egress. Using selectively engineered Fc variants, no protection was observed after administration of WT IgG1 in mice or hamsters. Conversely, the functionally enhanced Fc variant resulted in increased pathology in both the mouse and hamster models, causing weight loss in mice and enhanced viral replication and weight loss in the more susceptible hamster model, highlighting the pathological functions of Fc-enhancing mutations. These data point to the critical need for strategic Fc engineering for the treatment of SARS-CoV-2 infection. 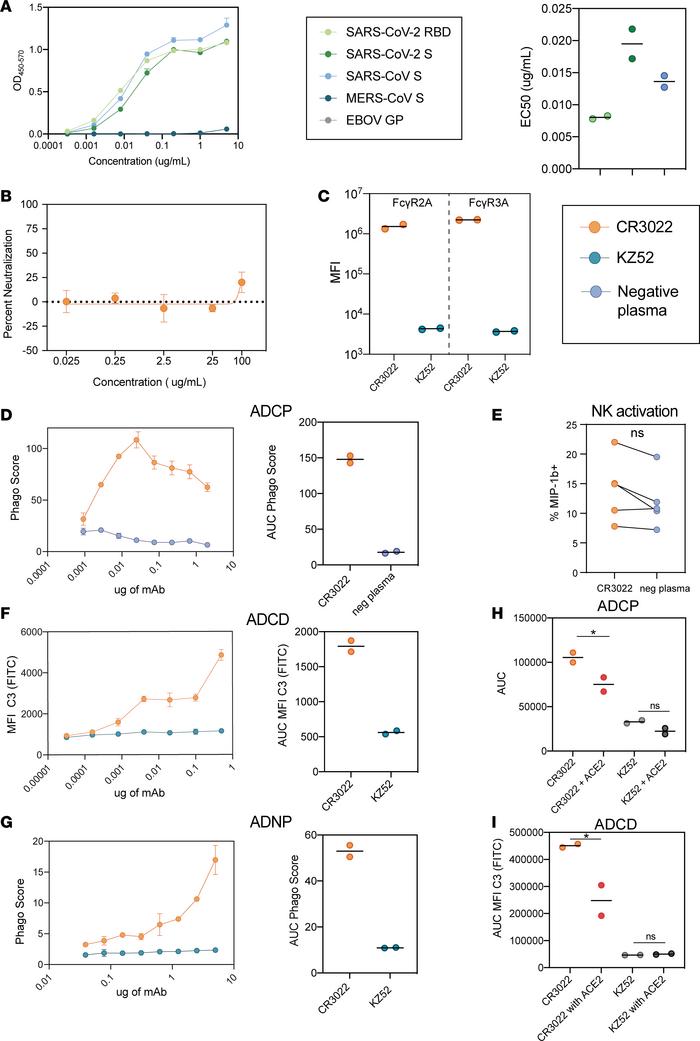 () CR3022 was serially diluted and tested for its ability to bind the spike protein of different coronaviruses by ELISA (left). Data are represented as the OD450 values background subtracted from the reference OD570 value. Each dot represents the average of 2 replicates. The bar plot displays the EC50 for each antigen. MERS RBD and Ebola virus (EBOV) glycoprotein are not displayed because their respective EC50 was each infinite. The bars represent the average of 2 replicates, and the error bars represent the standard deviation. () CR3022 was serially diluted and preincubated with SARS-CoV-2 before adding to the virus and antibody to Vero E6 cells. Percentage neutralization was determined by the percentage reduction in plaque counts compared with a vehicle control. Data represent the means of triplicates and error bars represent the standard deviation. () CR3022 and a control EBOV-specific antibody binding to FcγR2a and 3a were evaluated using Luminex with a serial dilution of CR3022. The AUC was calculated for the MFI values. The bar represents the mean of 2 replicates. (–) CR3022 was evaluated for its ability to drive ADCP (), NK activity (as measured by MIP-1b activity) (), ADCD (), and ADNP (). For the line graphs (left), each dot represents the mean of 2 replicates. For the bar graphs, values are represented as the mean AUC of 8 serial dilutions run in replicate. The error bars for the dots and the AUC represent the standard deviation. For the before-after plot (), each dot represents the activity of 1 donor after incubation with CR3022 or serum. Significance for NK activation () was determined by a Wilcoxon matched pairs signed rank test, * < 0.05. ( and ) The ability of CR3022 and a control EBOV-specific antibody (KZ52) to drive ADCP () and ADCD () in the presence of ACE2 was analyzed. The bars indicate the average AUC of 8 serial dilutions run in 2 replicates. The error bars represent the standard deviation. Significance was determined by a 1-way ANOVA test followed by Tukey’s multiple-comparison test. * < 0.05.