AT and DHF act as TrkB agonists in SGN. 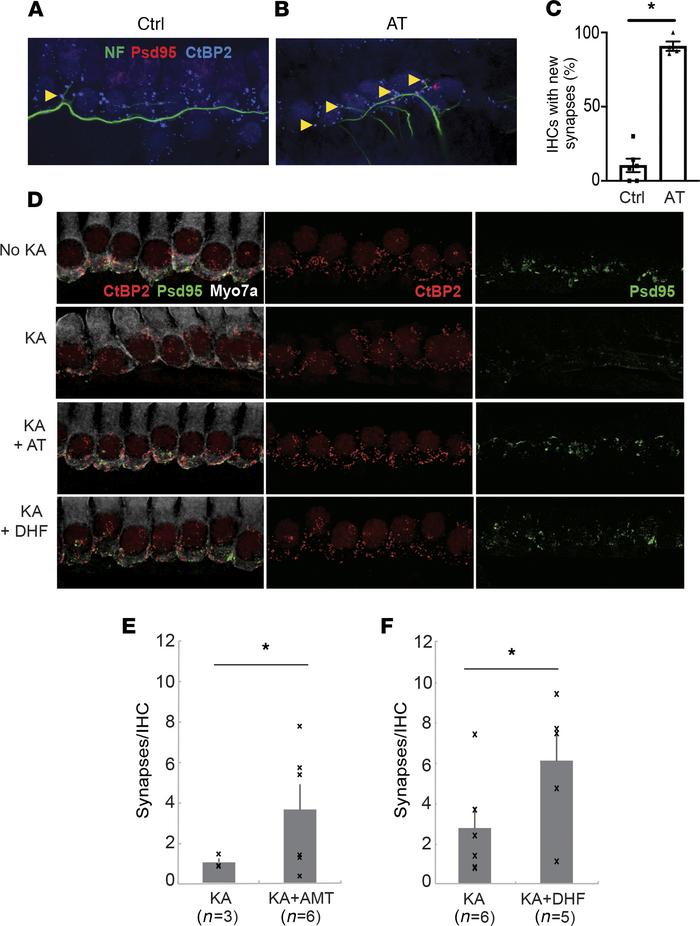 ( and ) Isolated SGNs and denervated organ of Corti were cocultured in the absence () or presence () of 0.5 μM AT. After 6 days in culture, explants were fixed and immunostained with antibodies against neurofilament (NF, green), CtBP2 (blue), and Psd95 (red), and confocal images were obtained in the inner hair cell region. () Juxtapositions of hair cell ribbons and afferent endings were identified by CtBP2/Psd95 puncta (yellow arrowheads in and ) and counted, indicating a significant increase in percentage of juxtaposed CtBP2/Psd-95 puncta at inner hair cells after AT treatment. Data are represented as mean ± SEM ( = 6 for Ctrl and 4 for AT); Student’s test; * < 0.05. () Cochlear explants were cultured with (KA) or without (no KA) exposure to kainic acid (0.4 mM) for 1 hour followed by treatment with culture medium with 0.1 μM AT (KA + AT) or 0.5 μM DHF (KA + DHF). The cultures were immunostained for CtBP2 (red) and Psd95 (green) after 48 hours. ( and ) AT () and DHF () induced significant synaptic regeneration. Data are represented as mean ± SEM ( = 3 for no KA, 3 for KA, and 6 for KA + AT in ; = 4 for no KA, 6 for KA, and 5 for KA + DHF in ; 2-tailed, unpaired Student’s test; * < 0.05.