Influenza virus infections affect millions of people annually, and current available vaccines provide varying rates of protection. However, the way in which the nasal microbiota, particularly established pneumococcal colonization, shape the response to influenza vaccination is not yet fully understood. In this study, we inoculated healthy adults with live Streptococcus pneumoniae and vaccinated them 3 days later with either tetravalent-inactivated influenza vaccine (TIV) or live attenuated influenza vaccine (LAIV). Vaccine-induced immune responses were assessed in nose, blood, and lung. Nasal pneumococcal colonization had no impact upon TIV-induced antibody responses to influenza, which manifested in all compartments. However, experimentally induced pneumococcal colonization dampened LAIV-mediated mucosal antibody responses, primarily IgA in the nose and IgG in the lung. Pulmonary influenza-specific cellular responses were more apparent in the LAIV group compared with either the TIV or an unvaccinated group. These results indicate that TIV and LAIV elicit differential immunity to adults and that LAIV immunogenicity is diminished by the nasal presence of S. pneumoniae. Therefore, nasopharyngeal pneumococcal colonization may affect LAIV efficacy. 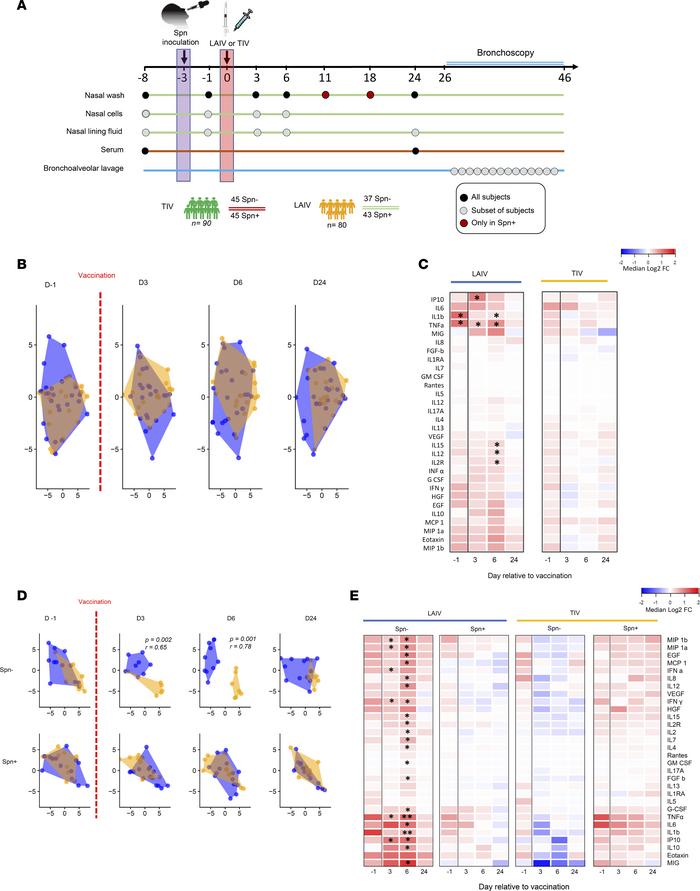 () Healthy adults ( = 170) 18–48 years of age were recruited and participated in a randomized, controlled clinical trial. Subjects were screened 8 days prevaccination (baseline), followed by challenge with live (Spn) 3 days before vaccination against influenza (D-3). Then, they received either LAIV or TIV at day 0 (D0). Serum samples were collected at baseline (D-8) and D24. Nasal washes were collected from all volunteers at D-8, D-1, D3, D6, and D24, plus at D11 and D18 for the colonized. Nasal fluid and cells were collected at D-8, D-1, D3, and D6, plus at D24 for nasal fluid only. BAL sample was collected 26–46 days after vaccination. (–) Levels of 30 cytokines were measured in nasal fluid at baseline, 1 day before vaccination (D-1), and 3, 6, and 24 days after vaccination for LAIV/Spn– (LAIV vaccinated/noncolonized, 15), LAIV/Spn+ (LAIV vaccinated/colonized, 15), TIV/Spn– (TIV vaccinated/noncolonized, 16) and TIV/Spn+ (TIV vaccinated/colonized, 14). ( and ) Samples were clustered based on fold change (FC) levels to baseline using t-distributed stochastic neighbor embedding for LAIV (blue) or TIV (orange). and values shown for significant time points based on analysis of similarity (anosim), including (FCs) for all cytokines. () Heatmap showing median log2FC to baseline levels at each time point after LAIV or TIV administration, irrespective of colonization status. Upregulation (red) and downregulation (blue) in cytokines’ levels from baseline. () Heatmap showing median log2FC to baseline levels at each time point for the 4 experimental groups, based on stratification by vaccine and colonization status. Statistical comparisons were applied against the baseline sample for each time point in every group independently. ** 0.01, * 0.05, Wilcoxon’s paired test with Benjamini-Hochberg correction for multiple testing.