Canagliflozin (Cana) is an FDA-approved diabetes drug that protects against cardiovascular and kidney diseases. It also inhibits the sodium glucose transporter 2 by blocking renal reuptake and intestinal absorption of glucose. In the context of the mouse Interventions Testing Program, genetically heterogeneous mice were given chow containing Cana at 180 ppm at 7 months of age until their death. Cana extended median survival of male mice by 14%. Cana also increased by 9% the age for 90th percentile survival, with parallel effects seen at each of 3 test sites. Neither the distribution of inferred cause of death nor incidental pathology findings at end-of-life necropsies were altered by Cana. Moreover, although no life span benefits were seen in female mice, Cana led to lower fasting glucose and improved glucose tolerance in both sexes, diminishing fat mass in females only. Therefore, the life span benefit of Cana is likely to reflect blunting of peak glucose levels, because similar longevity effects are seen in male mice given acarbose, a diabetes drug that blocks glucose surges through a distinct mechanism, i.e., slowing breakdown of carbohydrate in the intestine. Interventions that control daily peak glucose levels deserve attention as possible preventive medicines to protect from a wide range of late-life neoplastic and degenerative diseases.

Body composition and glucose homeostasis in Cana versus control mice. 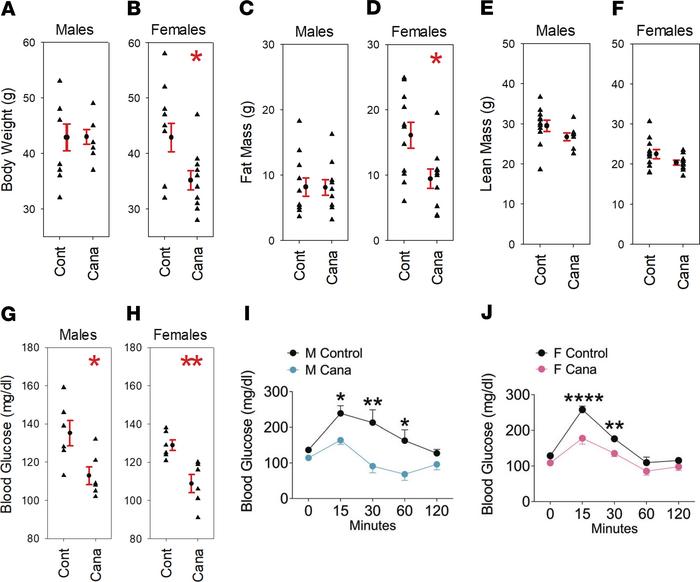