Although low circulating levels of the vitamin A metabolite, all-trans retinoic acid (ATRA), are associated with increased risk of cardiovascular events and all-cause mortality, few studies have addressed whether cardiac retinoid levels are altered in the failing heart. Here, we showed that proteomic analyses of human and guinea pig heart failure (HF) were consistent with a decline in resident cardiac ATRA. Quantitation of the retinoids in ventricular myocardium by mass spectrometry revealed 32% and 39% ATRA decreases in guinea pig HF and in patients with idiopathic dilated cardiomyopathy (IDCM), respectively, despite ample reserves of cardiac vitamin A. ATRA (2 mg/kg/d) was sufficient to mitigate cardiac remodeling and prevent functional decline in guinea pig HF. Although cardiac ATRA declined in guinea pig HF and human IDCM, levels of certain retinoid metabolic enzymes diverged. Specifically, high expression of the ATRA-catabolizing enzyme, CYP26A1, in human IDCM could dampen prospects for an ATRA-based therapy. Pertinently, a pan-CYP26 inhibitor, talarozole, blunted the impact of phenylephrine on ATRA decline and hypertrophy in neonatal rat ventricular myocytes. Taken together, we submit that low cardiac ATRA attenuates the expression of critical ATRA-dependent gene programs in HF and that strategies to normalize ATRA metabolism, like CYP26 inhibition, may have therapeutic potential. 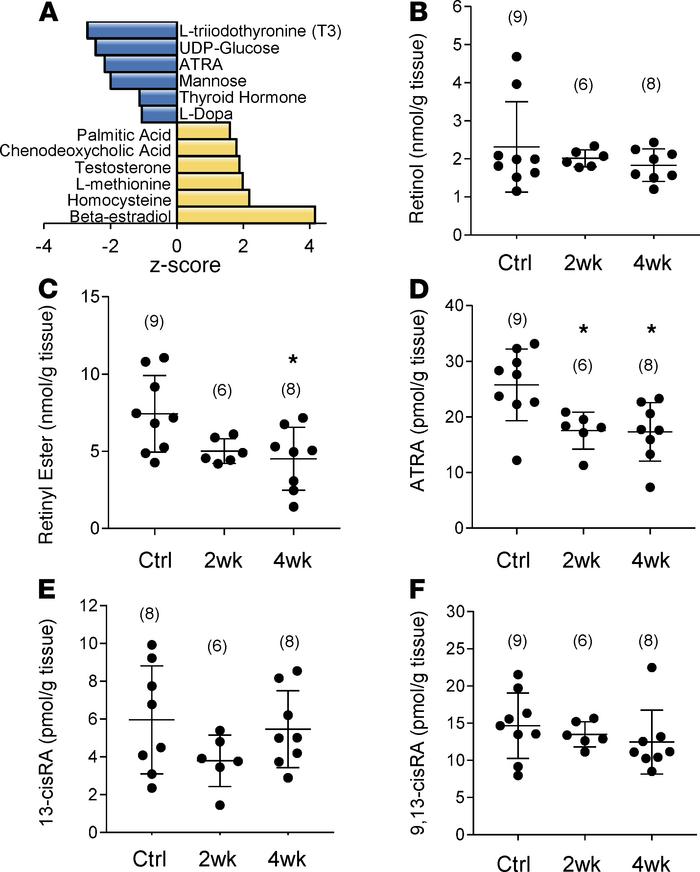 () URA analysis identified endogenous chemical compounds inferred to be altered, given the differential regulation of proteins in . Select compounds (Fisher’s exact test, < 0.05, score > 1.0) are shown. Low ATRA was specifically inferred from URA of guinea pig HF. – show the results of the analysis of cardiac retinoids. Experimental groups are as defined in . Group means were analyzed by 1-way ANOVA with a post hoc Tukey’s HSD test and < 0.05 was considered significant. values for each group are given in parentheses. () Retinol levels were unchanged from controls to HYP and HF. () The storage form of retinol, retinyl esters, declined significantly in HF but was already trending lower in HYP. () ATRA was significantly decreased in both HYP and HF, whereas other geometric isomers of retinoic acid did not differ significantly ( and ). As in human myocardium, 9--RA was not detected. * < 0.05.