A transcriptomic map of murine and human alopecia areata

A transcriptomic map of murine and human alopecia areata

Alopecia areata (AA) is a common autoimmune condition, presenting initially with loss of hair without other overt skin changes. The unremarkable appearance of the skin surface contrasts with the complex immune activity occurring at the hair follicle. AA pathogenesis is due to the loss of immune privilege of the hair follicle, leading to autoimmune attack. Although the literature has focused on CD8+ T cells, vital roles for CD4+ T cells and antigen-presenting cells have been suggested. Here, we use single-cell sequencing to reveal distinct expression profiles of immune cells in murine AA. We found clonal expansions of both CD4+ and CD8+ T cells, with shared clonotypes across varied transcriptional states. The murine AA data were used to generate highly predictive models of human AA disease. Finally, single-cell sequencing of T cells in human AA recapitulated the clonotypic findings and the gene expression of the predictive models. 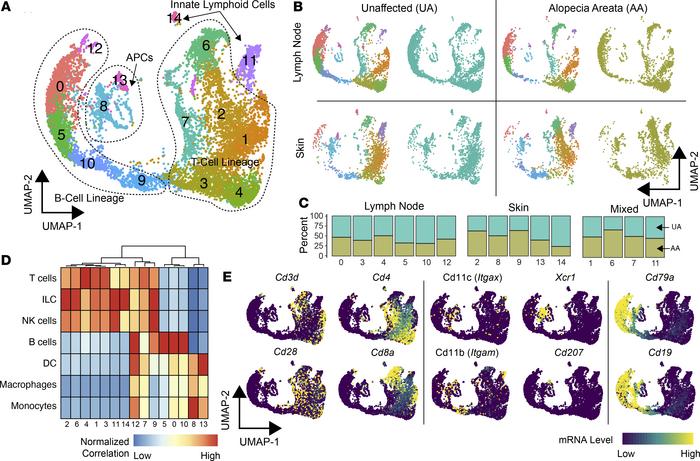 () UMAP plot of the flow-sorted CD45+ murine immune cells from UA ( = 6332) and AA ( = 4173). ( and ) UMAP plots demonstrating the relative distribution of UA and AA, as well as skin and lymph node cells along the UMAP plot () and by the breakdown in clusters (). () Normalized correlation values for predicted immune cell phenotypes based on the SingleR R package for each cluster. Cluster of columns based on Euclidean distance between normalized correlation values across all pure immune cell populations in the Immgen database (). () Lineage markers for T cells (, , , ), APCs (, , , [Langerin]), and B cells (, ).