TLR7 has been linked to the pathogenesis of glomerulonephritis, but its precise roles are not clear. In this study, we evaluated the roles of TLR7 in IgA nephropathy (IgAN). TLR7 proteins were abundant in CD19+ B cells infiltrated in the kidneys of patients with IgAN. The intensities of both intrarenal TLR7 and CD19 proteins were closely associated with kidney function (estimated glomerular filtration rate [eGFR] and serum creatinine concentration) and renal histopathology (tubular atrophy, leukocyte infiltration, tubulointerstitial fibrosis, and global glomerulosclerosis) in patients with IgAN. Meanwhile, TLR7 mRNA levels were significantly increased in peripheral blood B cells of patients with IgAN. TLR7+CD19+ B cells expressed inflammatory cytokines (IL-6 and IL-12) in kidneys and produced high levels of IgA1 and galactose deficient-IgA1 (Gd-IgA1) in peripheral blood of patients with IgAN. Mechanistically, TLR7 activated B cells to produce high levels of Gd-IgA1 via the TLR7-GALNT2 axis in IgAN. Protein levels of GALNT2 were increased by overexpression of TLR7, while they were reduced by TLR7 knockdown in B cells. GALNT2 overexpression augmented Gd-IgA1 production in B cells derived from patients with IgAN. Taken together, high TLR7 expression in B cells has dual roles in the development and progression of IgAN, by facilitating renal inflammation and Gd-IgA1 antibody synthesis. 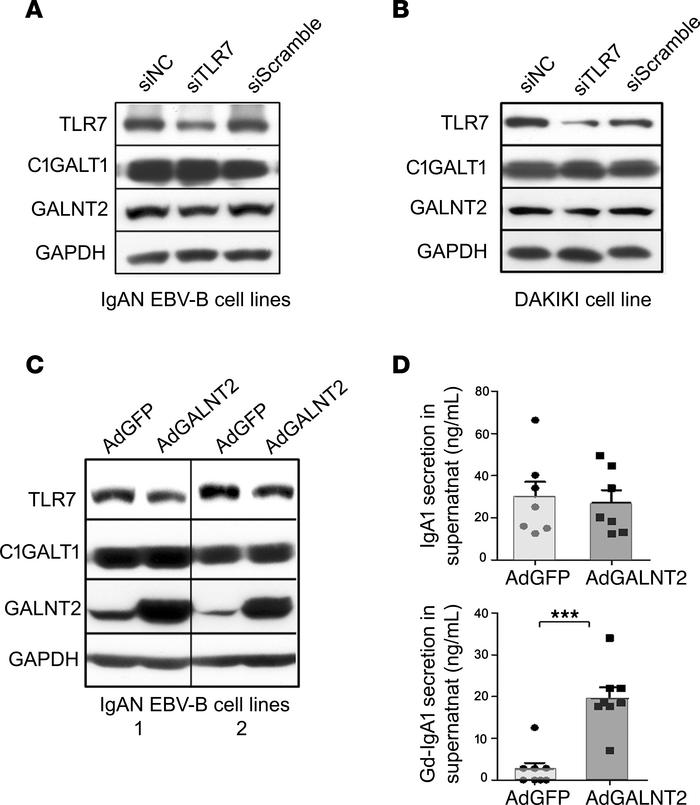 ( and ) Synthetic siRNA targeting human gene or control siRNA were electroporated into EBV-immortalized B cell lines derived from patients with IgAN () and DAKIKI B cell lines (). siNC, negative control; siTLR7, siRNA for ; siScramble, scramble siRNA control for . () Adenoviruses carrying coding sequences for (AdGALNT2) or (AdGFP) gene were transfected into EBV-immortalized B cells derived from patients with IgAN. Cells were collected after 72 hours and analyzed by Western blot for target proteins. These experiments were repeated independently 3 times, and representative data was selected for display. () Culture supernatant was collected 6 days after transfection and analyzed by IgA1 and Gd-gA1 ELISA ( = 7). Data are presented as mean ± SEM and analyzed by 2-tailed unpaired Student’s test. *** < 0.001.