Rituximab, a B cell–depleting therapy, is indicated for treating a growing number of autoantibody-mediated autoimmune disorders. However, relapses can occur after treatment, and autoantibody-producing B cell subsets may be found during relapses. It is not understood whether these autoantibody-producing B cell subsets emerge from the failed depletion of preexisting B cells or are generated de novo. To further define the mechanisms that cause postrituximab relapse, we studied patients with autoantibody-mediated muscle-specific kinase (MuSK) myasthenia gravis (MG) who relapsed after treatment. We carried out single-cell transcriptional and B cell receptor profiling on longitudinal B cell samples. We identified clones present before therapy that persisted during relapse. Persistent B cell clones included both antibody-secreting cells and memory B cells characterized by gene expression signatures associated with B cell survival. A subset of persistent antibody-secreting cells and memory B cells were specific for the MuSK autoantigen. These results demonstrate that rituximab is not fully effective at eliminating autoantibody-producing B cells and provide a mechanistic understanding of postrituximab relapse in MuSK MG.

Memory B cells have distinct transcriptional and repertoire features associated with persistence. 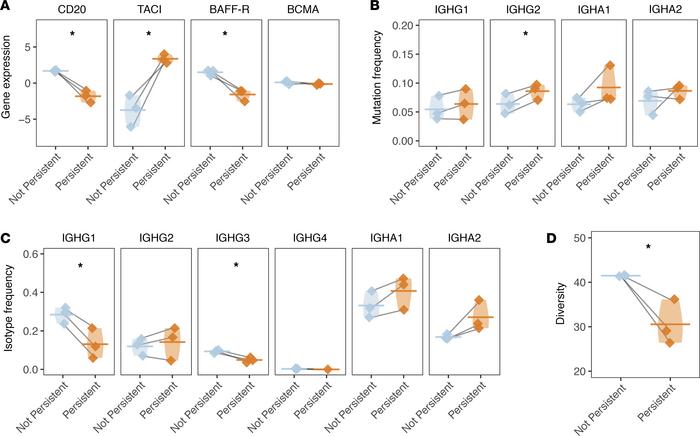