Effects of B cell–activating factor on tumor immunity

Effects of B cell–activating factor on tumor immunity

Immunotherapies that modulate T cell function have been firmly established as a pillar of cancer therapy, whereas the potential for B cells in the antitumor immune response is less established. B cell–activating factor (BAFF) is a B cell–activating cytokine belonging to the TNF ligand family that has been associated with autoimmunity, but little is known about its effects on cancer immunity. We find that BAFF upregulates multiple B cell costimulatory molecules; augments IL-12a expression, consistent with Be-1 lineage commitment; and enhances B cell antigen-presentation to CD4+ Th cells in vitro. In a syngeneic mouse model of melanoma, BAFF upregulates B cell CD40 and PD-L1 expression; it also modulates T cell function through increased T cell activation and TH1 polarization, enhanced expression of the proinflammatory leukocyte trafficking chemokine CCR6, and promotion of a memory phenotype, leading to enhanced antitumor immunity. Similarly, adjuvant BAFF promotes a memory phenotype of T cells in vaccine-draining lymph nodes and augments the antitumor efficacy of whole cell vaccines. BAFF also has distinct immunoregulatory functions, promoting the expansion of CD4+Foxp3+ Tregs in the spleen and tumor microenvironment (TME). Human melanoma data from The Cancer Genome Atlas (TCGA) demonstrate that BAFF expression is positively associated with overall survival and a TH1/IFN-γ gene signature. These data support a potential role for BAFF signaling as a cancer immunotherapy.

BAFF upregulates multiple B cell costimulatory molecules in vitro and induces a Be-1 phenotype in B cells. 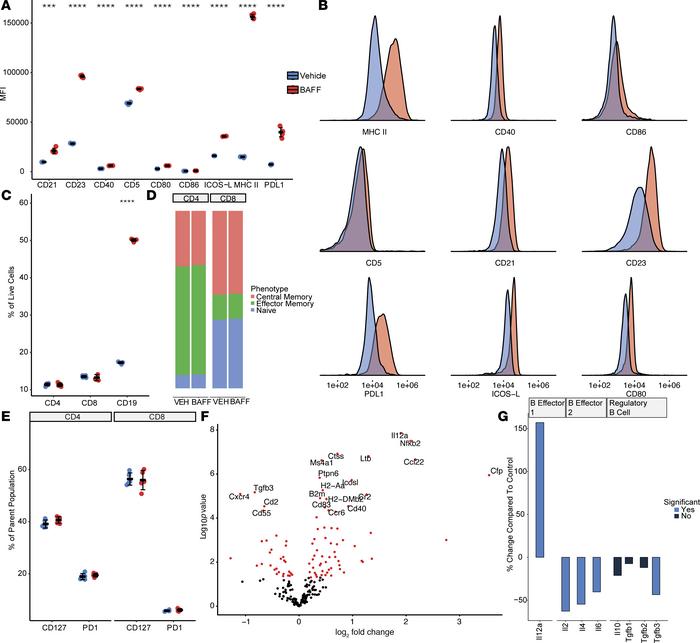 () Treatment of isolated B cells with BAFF in vitro significantly upregulates the expression of CD21, CD23, CD40, CD5, CD80, CD86, ICOS-L, MHCII, and PD-L1 ( = 5 per group, 2-tailed unpaired test, *** < 0.001, **** < 0.0001) () Representative histograms describing the increase in MFI of B cell costimulatory molecules. () Treatment of whole splenocytes with recombinant BAFF in vitro increases the number of living B cells without significantly affecting T cells ( = 5 per group, 2-tailed unpaired test, *** < 0.001) ( and ) Similarly, in vitro treatment with BAFF does not change the phenotype or exhaustion profile of isolated T cells cultured with BAFF, suggesting that the downstream consequences of BAFF stimulation are most pronounced on B cells ( = 5 per group). () Targeted gene expression analysis of isolated B cells cultured with or without BAFF for 48 hours showed that the expression of ICOSL, CD40, H2-DMB2, and H2-Aa were among the most differentially expressed genes with BAFF ( = 3 per group). Significance was determined by nSolver’s DE Call function and adjusted using the Benjamini-Yekutieli correction method. () BAFF leads to upregulation of IL-12a, suggesting enhanced B cell polarization toward a Be-1 phenotype, whereas expression of genes associated with a Be-2 or Breg phenotype were decreased with BAFF.