BACKGROUND Baseline expression of FCRL5, a marker of naive and memory B cells, was shown to predict response to rituximab (RTX) in rheumatoid arthritis. This study investigated baseline expression of FCRL5 as a potential biomarker of clinical response to RTX in granulomatosis with polyangiitis (GPA) and microscopic polyangiitis (MPA).METHODS A previously validated quantitative PCR–based (qPCR-based) platform was used to assess FCRL5 expression in patients with GPA/MPA (RAVE trial, NCT00104299).RESULTS Baseline FCRL5 expression was significantly higher in patients achieving complete remission (CR) at 6, 12, and 18 months, independent of other clinical and serological variables, among those randomized to RTX but not cyclophosphamide-azathioprine (CYC/AZA). Patients with baseline FCRL5 expression ≥ 0.01 expression units (termed FCRL5hi) exhibited significantly higher CR rates at 6, 12, and 18 months as compared with FCRL5lo subjects (84% versus 57% [P = 0.016], 68% versus 40% [P = 0.02], and 68% versus 29% [P = 0.0009], respectively).CONCLUSION Our data taken together suggest that FCRL5 is a biomarker of B cell lineage associated with increased achievement and maintenance of complete remission among patients treated with RTX and warrant further investigation in a prospective manner.FUNDING The analysis for this study was funded by Genentech Inc. 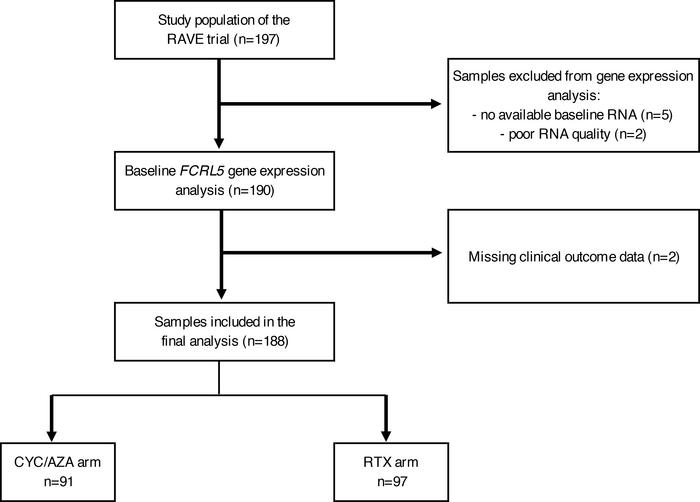