Efficient adeno-associated virus–mediated (AAV-mediated) gene delivery remains a significant obstacle to effective retinal gene therapies. Here, we apply directed evolution — guided by deep sequencing and followed by direct in vivo secondary selection of high-performing vectors with a GFP-barcoded library — to create AAV viral capsids with the capability to deliver genes to the outer retina in primates. A replication-incompetent library, produced via providing rep in trans, was created to mitigate risk of AAV propagation. Six rounds of in vivo selection with this library in primates — involving intravitreal library administration, recovery of genomes from outer retina, and extensive next-generation sequencing of each round — resulted in vectors with redirected tropism to the outer retina and increased gene delivery efficiency to retinal cells. These viral vectors expand the toolbox of vectors available for primate retina, and they may enable less invasive delivery of therapeutic genes to patients, potentially offering retina-wide infection at a similar dosage to vectors currently in clinical use.

Workflow of directed evolution of AAV in the primate retina. 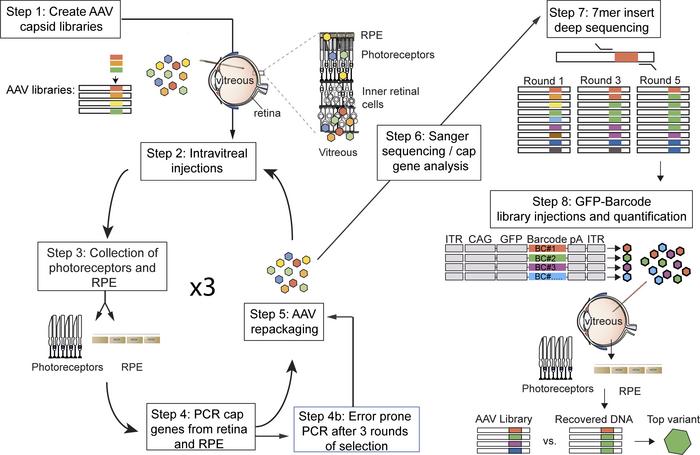 Highly diverse (~1 × 107) libraries of AAV variants were packaged such that each virus contained a genome encoding its own capsid. Libraries were pooled and injected intravitreally in primates. After AAV infection had occurred, retinal tissue and RPE cells were collected, and gene variants were PCR amplified, recloned, and repackaged for the subsequent round of injection. Five rounds of selection were performed, and error-prone PCR was performed after the third round to introduce additional diversity into the library. After the selections, each pool was subjected to deep sequencing to analyze the dynamics of each individual variant and overall convergence of the library. Based on their increase in representation relative to the original library, individual variant capsids were chosen and used to package a scCAG-eGFP genome also containing a unique DNA barcode sequence. These barcoded vectors were then pooled in equal amounts and injected intravitreally. Retinal cells (photoreceptors or RPE cells) were harvested, GFP barcodes were PCR amplified from the collected tissue, and deep sequencing was used to quantify the relative abundance of barcodes. The top-performing variants were evident because those with the greatest fold increase of barcodes recovered from collected tissue relative to the injected library. AAV, adeno-associated virus; RPE, retinal pigment epithelium.