Current models of B lymphocyte biology posit that B cells continuously recirculate between lymphoid organs, without accumulating in peripheral healthy tissues. Nevertheless, B lymphocytes are one of the most prevalent leukocyte populations in the naive murine heart. To investigate this apparent inconsistency in the literature, we conducted a systematic analysis of myocardial B cell ontogeny, trafficking dynamics, histology, and gene expression patterns. We found that myocardial B cells represent a subpopulation of circulating B cells that make close contact with the microvascular endothelium of the heart and arrest their transit as they pass through the heart. The vast majority (>95%) of myocardial B cells remain intravascular, whereas few (<5%) myocardial B cells cross the endothelium into myocardial tissue. Analyses of mice with B cell deficiency or depletion indicated that B cells modulate the myocardial leukocyte pool composition. Analysis of B cell–deficient animals suggested that B cells modulate myocardial growth and contractility. These results transform our current understanding of B cell recirculation in the naive state and reveal a previously unknown relationship between B cells and myocardial physiology. Further work will be needed to assess the relevance of these findings to other organs.

Myocardial B cells are a subset of circulating B lymphocytes with distinct transcriptome that adheres to the myocardial endothelium. 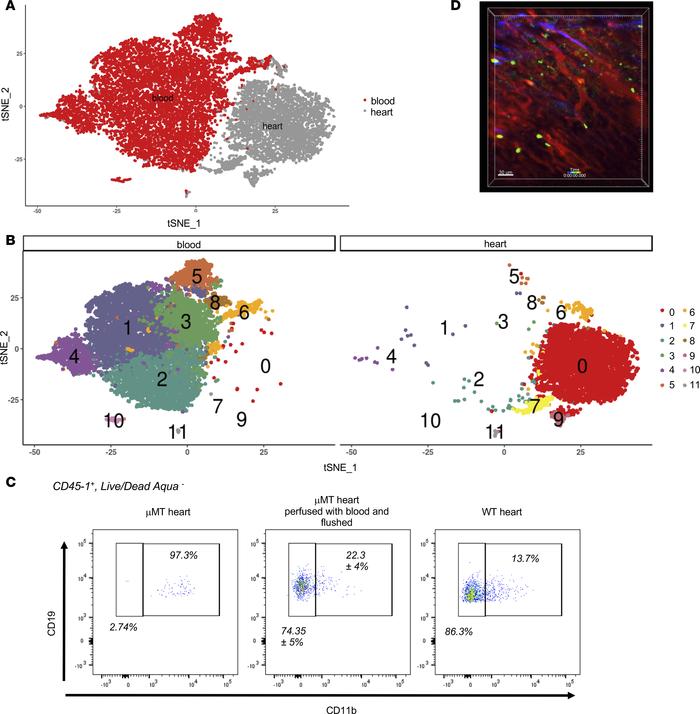 () tSNE plot of 10× single cell sequencing data from CD45+CD19+ cells sorted from the heart and the blood of the same pool of WT 10-week-old C57/B6J mice. B cells sorted from the heart have a different gene expression profile than B cells sorted from the blood. The experiment was repeated twice. () tSNE plot integrated with unsupervised clustering. Myocardial (heart) and circulating (blood) B cells overall contain cells with similar gene expression profile. However, specific clusters of cells, such as cluster 0, are enriched in the heart, while other clusters of cells, such as cluster 1, are enriched in the blood. () The heart from a μMT mouse has almost no myocardial B cells (panel on the left, representative plot). After ex vivo perfusion with WT blood and rinsing, the μMT heart contains a sizeable population of CD19+ B cells (panel in the middle, = 3 reporting average percentage of cells in each gate ± SD), which is very similar to that observed in the heart of a WT animal (panel on the right). Representative FACS plots. () Still image from intravital microscopy of B cells flowing through a transplanted heart. B cells are depicted in green, while the vasculature is depicted in red. A number of B lymphocytes is still and well visible within the myocardial microvasculature (see ). Representative image from videos collected from multiple hearts.