Renal cell carcinoma (RCC) is characterized by a particularly broad metastatic swath, and, enigmatically, when the pancreas is a destination, the disease is associated with improved survival. Intrigued by this observation, we sought to characterize the clinical behavior, therapeutic implications, and underlying biology. While pancreatic metastases (PM) are infrequent, we identified 31 patients across 2 institutional cohorts and show that improved survival is independent of established prognostic variables, that these tumors are exquisitely sensitive to antiangiogenic agents and resistant to immune checkpoint inhibitors (ICIs), and that they are characterized by a distinctive biology. Primary tumors of patients with PM exhibited frequent PBRM1 mutations, 3p loss, and 5q amplification, along with a lower frequency of aggressive features such as BAP1 mutations and loss of 9p, 14q, and 4q. Gene expression analyses revealed constrained evolution with remarkable uniformity, reduced effector T cell gene signatures, and increased angiogenesis. Similar findings were observed histopathologically. Thus, RCC metastatic to the pancreas is characterized by indolent biology, heightened angiogenesis, and an uninflamed stroma, likely underlying its good prognosis, sensitivity to antiangiogenic therapies, and refractoriness to ICI. These data suggest that metastatic organotropism may be an indicator of a particular biology with prognostic and treatment implications for patients. 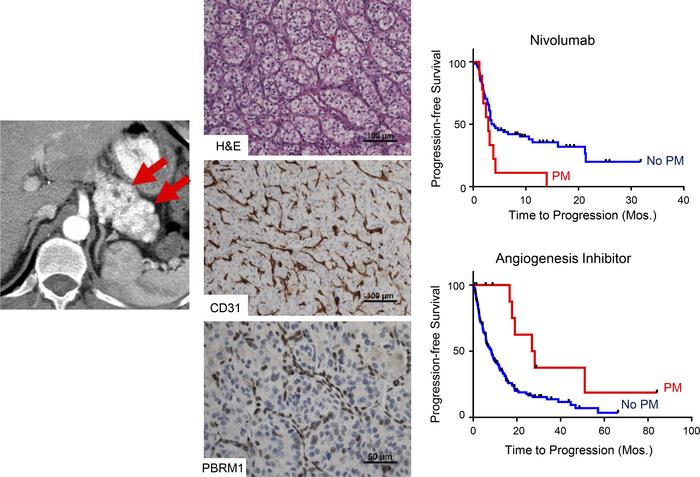