In order to prioritize available immune therapeutics, immune profiling across glioma grades was conducted, followed by preclinical determinations of therapeutic effect in immune-competent mice harboring gliomas. T cells and myeloid cells were isolated from the blood of healthy donors and the blood and tumors from patients with glioma and profiled for the expression of immunomodulatory targets with an available therapeutic. Murine glioma models were used to assess therapeutic efficacy of agents targeting the most frequently expressed immune targets. In patients with glioma, the A2aR/CD73/CD39 pathway was most frequently expressed, followed by the PD-1 pathway. CD73 expression was upregulated on immune cells by 2-hydroxyglutarate in IDH1 mutant glioma patients. In murine glioma models, adenosine receptor inhibitors demonstrated a modest therapeutic response; however, the addition of other inhibitors of the adenosine pathway did not further enhance this therapeutic effect. Although adenosine receptor inhibitors could recover immunological effector functions in T cells, immune recovery was impaired in the presence of gliomas, indicating that irreversible immune exhaustion limits the effectiveness of adenosine pathway inhibitors in patients with glioma. This study illustrates vetting steps that should be considered before clinical trial implementation for immunotherapy-resistant cancers, including testing an agent’s ability to restore immunological function in the context of intended use. 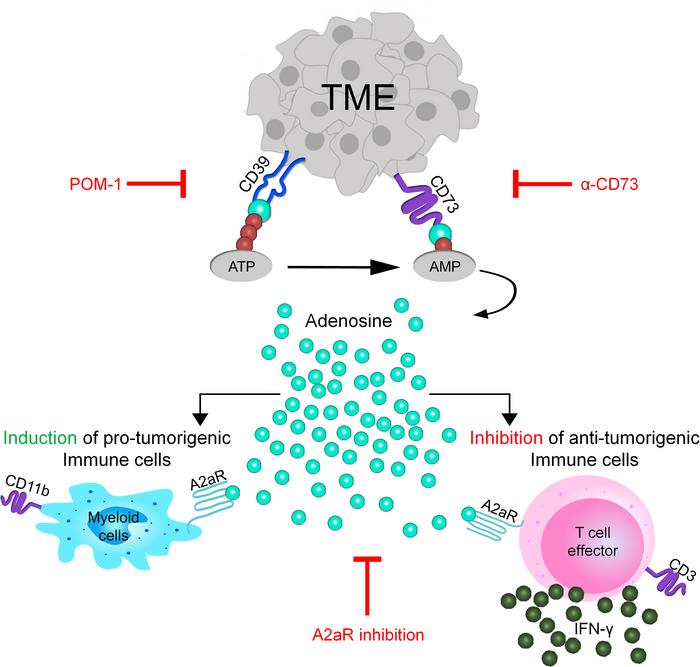