Alternative polyadenylation (APA) is a widespread and important mechanism in regulation of gene expression. Dysregulation of the 3′ UTR cleavage and polyadenylation represents a common characteristic among many disease states, including lung fibrosis. In this study, we investigated the role of mammalian cleavage factor I–mediated (CFIm-mediated) APA in regulating extracellular matrix production in response to mechanical stimuli from stiffened matrix simulating the fibrotic lungs. We found that stiff matrix downregulated expression of CFIm68, CFIm59 and CFIm25 subunits and promoted APA in favor of the proximal poly(A) site usage in the 3′ UTRs of type I collagen (COL1A1) and fibronectin (FN1) in primary human lung fibroblasts. Knockdown and overexpression of each individual CFIm subunit demonstrated that CFIm68 and CFIm25 are indispensable attributes of stiff matrix–induced APA and overproduction of COL1A1, whereas CFIm did not appear to mediate stiffness-regulated FN1 APA. Furthermore, expression of the CFIm subunits was associated with matrix stiffness in vivo in a bleomycin-induced mouse model of pulmonary fibrosis. These data suggest that stiff matrix instigates type I collagen biogenesis by selectively targeting mRNA transcripts for 3′ UTR shortening. The current study uncovered a potential mechanism for regulation of the CFIm complex by mechanical cues under fibrotic conditions. 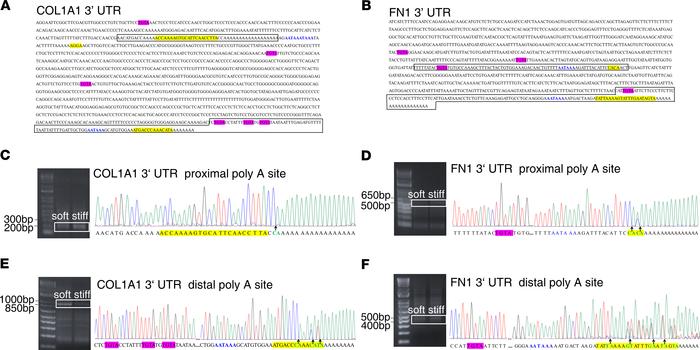 ( and ) Prediction analysis of the cleavage sites (yellow), UGUA-containing (or TGTA-containing) USEs (hot pink), and polyadenylation signals (blue) in the 3′ UTRs of COL1A1 and FN1 transcripts. () 3′ RACE products were separated on agarose gels, purified, and sequenced. Graphs show DNA sequences flanking the cleavage sites, as indicated by the boxed areas in and . Arrows indicate the cleavage sites.